The attorney general directed the FBI on Oct. 4 to target parents who allegedly threaten violence against public school officials. He also ordered authorities in September to enforce the FACE Act in response to any violence from pro-life activists. 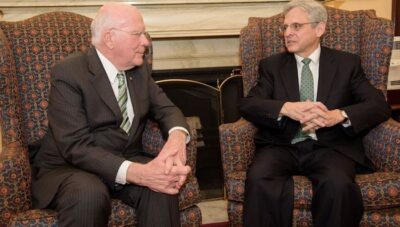 But the Department of Justice has not explained or offered examples of the violence it is referring to in either of these instances. The DOJ did not respond to the Daily Caller News Foundation’s many requests for comment on this point.

And as the DOJ’s silence continues, attorneys general, parents, Republican lawmakers and conservative commentators express outraged concern that the Biden administration is using the DOJ to strike back against parents trying to protect the integrity of their children’s education.

“To unleash the DOJ on concerned parents and pro-lifers without cause is prosecutorial abuse in the name of politics,” said Severino, the former director of the Office of Civil Rights under President Donald Trump’s administration.

“If Garland truly cares about threats in education, he should investigate woke college mobs who routinely physically intimidate and threaten speakers who dare to present a conservative point of view on campus,” Severino added.

Following outrage and protest from parents across the country regarding progressive Critical Race Theory and LGBTQ content in schools, Garland called on the FBI Monday to “use its authority” against parents who threaten or use violence against public school officials.

The attorney general said there has been a “disturbing spike in harassment, intimidation, and threats of violence against school administrators, board members, teachers, and staff” and directed the FBI to work with each U.S. attorney and leaders “in each federal judicial district” to discuss strategy to address threats within 30 days of his statement.

The DOJ’s memorandum did not specify what it classifies as a crime.

Garland’s statement follows a letter from the National School Board Association (NSBA) that asked the federal government to get involved in the “immediate threat” of violence from parents faced by American public schools and its education officials. The NSBA said the incidents could be “the equivalent to a form of domestic terrorism and hate crimes.”

“It is shameful that activists are weaponizing the US Department of Justice against parents,” Nicole Neily, president of Parents Defending Education told the DCNF in response to the memorandum. “This is a coordinated attempt to intimidate dissenting voices in the debates surrounding America’s underperforming K-12 education – and it will not succeed. We will not be silenced.”

In early September, Garland also promised that the DOJ would protect women seeking abortions in Texas through “criminal and civil enforcement of the FACE Act” in response to Democratic outrage over Texas’ Heartbeat Act. The move came shortly after the Supreme Court denied abortion providers’ requests to block the law.

Garland suggested that women and abortion clinics may be at risk of violence, physical obstruction, or property damage as a result of the new law.

“While the Justice Department urgently explores all options to challenge Texas SB8 in order to protect the constitutional rights of women and other persons, including access to an abortion, we will continue to protect those seeking to obtain or provide reproductive health services pursuant to our criminal and civil enforcement of the FACE Act,” Garland said in a statement.

Human Coalition Action Texas State Director Chelsey Youman told the DCNF at the time that the FACE Act “does not apply in this context.”

“If violating the FACE Act is all the DOJ has come up with to block the Texas Heartbeat Act, that’s good news,” Youman said. “SB 8 is a peaceful and Constitutional law that uses civil lawsuits to protect innocent children from death by abortion.”

Liberals Once Suggested Garland Was The Safe, Moderate Choice

Garland has long been lauded as a moderate Democratic pick — dating back to when former President Barack Obama nominated him to the Supreme Court in 2016. Many critics argued he wasn’t liberal enough at the time.

As President-elect Joe Biden sought to reinvigorate public confidence in the Justice Department, he looked to Garland, a so-called moderate presence in the U.S. Court of Appeals for the D.C. Circuit, The Washington Post reported.

His record, such as his “tough-on-crime approach” garnered concerns from liberals that he wouldn’t be aggressive enough as the Biden administration’s attorney general, Vox reported. But, Garland announced plans in May to “restore the Justice Department’s role in leading efforts across government to seek and secure meaningful access to justice.”

FBI Does Not Collect Information On Violent Antifa Crimes

Though the DOJ is focusing in on threats of violence from parents and pro-life activists, FBI Assistant Director of Counterterrorism Timothy Langan said during a Sept. 29 hearing on “Confronting Violent White Supremacy” that the FBI does not consider Antifa an “organization.”

The FBI would instead classify Antifa a “movement,” Langan said, and thus does not have information on “how many acts of violence or domestic terrorism has Antifa committed over the last two years.”

“Since we don’t categorize Antifa, nor do we calculate or collate information regarding Antifa, that movement, we don’t have that,” Langan said, Townhall reported. “But we can provide you information on anarchist threats and cases in general.”

The senior counterterrorism officer made these comments in spite of the violent left-wing riots that shook America throughout the summer of 2020 following the death of George Floyd. Many of those who committed violent crimes during the rioting were members of Antifa or Black Lives Matter, the organization.

The DOJ did not respond to requests for comment from the DCNF on why it is not tracking violent crimes from Antifa members if it is focusing on alleged violent threats from parents and pro-lifers.