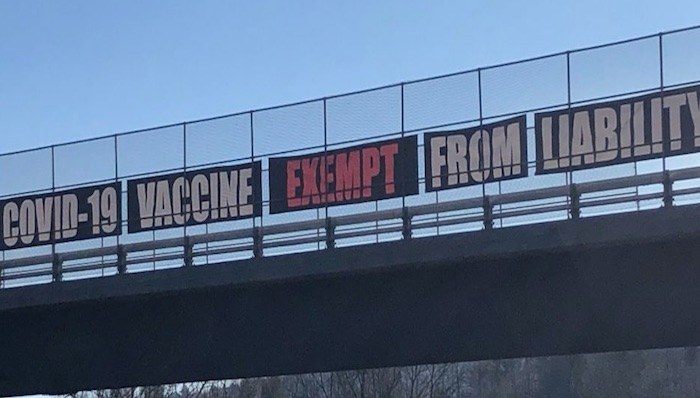 MAKING A POINT: This banner was part of an international demonstration last year called “V is for Vaccine.” On Friday and Saturday, there will be similar signs appearing along main roads in South Burlington and Essex.

There are two events scheduled for this weekend that involve supporting the trucker convoys that started in Canada and now are spreading around the world, including to the U.S. and Vermont.

Vermont Stands Up will be involved in an event this Saturday — a sign wave on the South Burlington I-89 overpass from 12:00 to 2:30 p.m. Another event is scheduled for Friday at the five-corner Intersection in Essex Junction, from 3:45 to 5:15 p.m.

Vermont resident Steve Bellows told True North by phone Thursday that he will be at the event on Saturday. He offered some more insights.

“In South Burlington, we started that last week,” he said. “And we’ve been almost there daily. It just depends on the weather, it’s really cold out. We’ll be there Saturday at noon.”

“The word’s gotten out, and we have other groups that are getting involved, like Vermont Stands Up. … It’s just getting people together and active. There’s a lot of people but they don’t want to get out there.”

He said that folks who take up political causes need to be ready for a backlash, and that’s OK.

“You can’t sit there and complain about it and expect things to change,” Bellows said. “ … The fear has been instilled by these politicians — anywhere you go there’s always somebody that’s trying to push somebody around, and people are getting sick and tired of it. But a lot of people, that’s just what they are used to: being told what to do.”

He said mainstream news outlets are putting pressure on people not to speak out.

“That’s what I think steers some people away. Maybe they don’t want to be seen as being involved because the news, the mainstream news, creates these narratives that are so backward and dishonest,” Bellows said. “It’s just crazy, but more people are coming out of their shell. We’ve had two people from Canada come. … One lady fled Canada, because if you try to leave Canada and you are not vaccinated and you try to leave or get on a plane, they can arrest you.”

Bellows is encouraging Vermonters to support each event. He said that Saturday’s event is called the “Vermont Freedom Rally Flag Wave.”

“I started it as a group — we’ve been there almost every day except for a couple of days in the cold weather,” he said.

Bill Moore, legislative policy analyst for Vermont Stands Up, also expects to be at Saturday’s event.

“Our main concern in supporting this rally, this protest, is to see that our children, especially, are freed from all of these mandates immediately,” he said.

Truckers in Canada are seeing increased police presence while they are still in Ottawa, the nation’s capital. Meanwhile, for the U.S., a similar trucker convoy is convening in California and may soon start towards Washington, D.C.

The events in Vermont will not directly correspond with a truck convoy, but there still is potential that one will be coming through Vermont, according to reporting at The Vermont Daily Chronicle.

8 thoughts on “Two events this weekend in Vermont to support Canadian, US trucker freedom convoys”