SWANTON, Vt. — Leaders in Swanton are declaring victory following news that Swanton Wind has withdrawn its application for a seven-turbine project expected to generate 20 megawatts of power, or enough electricity for an estimated 7,800 homes.

Project manger Nick Charyk, in a news release sent out early in the week, said the developer is pausing development.

“Today, Swanton Wind LLC announced that it is pausing development work and will voluntarily withdraw its application for a certificate of public good from Vermont’s Public Utility Commission,” the press release states. “Citing concerns about newly proposed federal tax changes and an unpredictable permitting process at the state level, Swanton Wind explained that development work will be put on hold.” 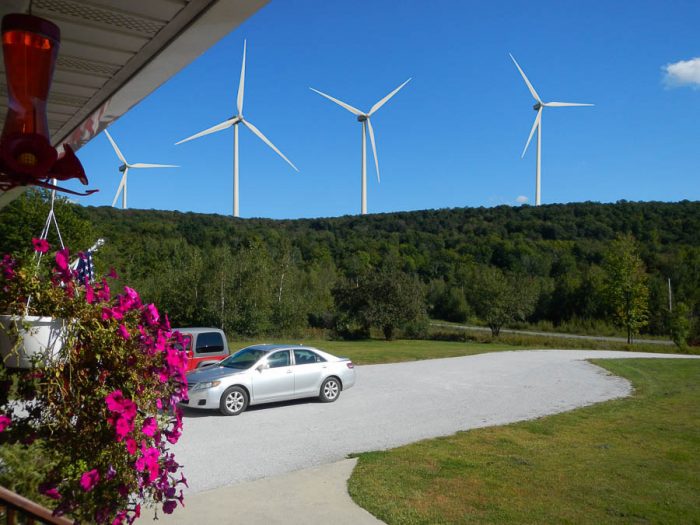 NO TURBINES AFTER ALL: After years of struggle, the town of Swanton will no longer have an industrial scale wind turbine project looming in the planning phases while residents stress. This photo rendering portrays what things might have looked like from the home of a nearby resident.

Charyk said the project has become too risky in light of multiple recent developments.

“A prudent business must manage risk to an acceptable level,” he said. “Unfortunately, a confluence of factors has combined to create an unacceptable level of business risk. Uncertainty around the federal tax policies that drive the economics of independent power projects like Swanton Wind have significantly impacted project financing.

“Here in Vermont, the project currently faces a hostile environment from an administration opposed to wind energy, regulators, and monopoly utilities who import a majority of Vermont’s power while opposing many independent local power projects.”

Some Swanton Selectboard members expressed relief over the news.

“I think it’s great news for the community,” said board member Dan Billado. “The Selectboard fought this hard; we had a lot of people opposed to it that fought this hard. We were pretty much told that we weren’t going to beat this.”

He said they’ve had support from St. Albans and Fairfield selectboards in terms of finances for legal fees. Billado said if the process had been allowed to drag on, the costs would have kept going up.

“It costs the taxpayers a lot of money for lawyers, and additionally we had two other towns that helped us out with the burden of legal costs,” he said. “That’s taxpayers’ money, that we had to spend to fight something that was not in the best interest of the taxpayers.”

Concerns about the project ranged from aesthetics and environmental impacts to health impacts via the sound and vibrations that large turbines are know to emit.

“You’re talking 500-foot towers — tell me anywhere else in the state of Vermont where there is a 500-foot structure?” Billado said. “That’s 50 stories. Even the windmills on Georgia Mountain or Lowell are not 500 feet.”

If there is a re-submission of the application in the future, it will happen under a more stringent regional planning document, which on page 16 specifically excludes industrial wind turbines. That’s in addition to new sound rules developed by the Public Utilities Commission that call for stronger decibel limits for day time and night time operation.

Swanton Selectboard Chair Joel Clark and Vice Chair James Guilmette also spoke with True North, and both said local constituents were almost exclusively against the project for a combination of reasons.

The developers were undergoing a “system impact study” to determine what was going to be needed on the local grid if the project went forward. Sally Collopy, one of the residents who led opposition to the project, told True North that grid capacity may have played a role in the withdrawal.

“Did the SIS [System Impact Study] disclose something unfavorable, and if so shouldn’t we be allowed to know?”

She added that she worries the project could return at some point.

“Other industrial wind projects that have gone away have made similar threats. Maybe it’s a saving face type of statement, or maybe they’re hoping that a pro-industrial wind administration will come into office,” she said.

“But as tax credits decline, grid constraints continue, and Vermonters become more educated about the harmful effects of industrial wind, I think any community is going to have a very hard time getting a project supported.”