The Trump administration is tapping $3.6 billion in military funds to build 175 miles of border wall, the Pentagon confirmed to the Daily Caller News Foundation.

Secretary of Defense Mark Esper authorized the military construction funds for 11 different wall projects on the U.S.-Mexico border. The announcement is the latest move by President Donald Trump after he declared an emergency at the southern border in February, giving him the ability to tap billions more for wall construction. 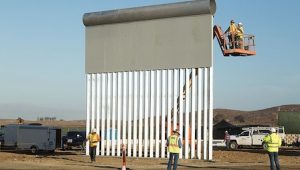 “These projects will deter illegal entry, increase the vanishing time of those illegally crossing the border, and channel migrants to ports of entry. They will reduce the demand for DoD personnel and assets at the locations where the barriers are constructed and allow the redeployment of DoD personnel and assets to other high-traffic areas on the border without barriers,” read Esper’s letter to Congress Tuesday, first obtained by CNN.

Esper also made clear that the administration was not going to allow government red tape to slow down progress.

“Accordingly, I have authorized and directed the Acting Secretary of the Army to undertake these 11 projects expeditiously, and, as authorized by Section 2808, to do so without regard to any other provision of law that may impede the expeditious construction of such projects in response to the national emergency,” the letter continued.

Funding for border wall construction has been a major source of contention between the White House and congressional Democrats. Trump, who campaigned on building a massive wall between Mexico and the U.S., has fought for more money, while Democrats have resisted tooth and nail against the idea.

The fight escalated into the country’s longest government shutdown. The federal shutdown ended in February with Trump and Democrats agreeing on $1.37 billion for wall construction. However, Trump then declared a national emergency, allowing him to use around $8 billion for the wall.

The announcement Tuesday was met with immediate pushback from Democratic lawmakers and progressive groups.

“It is a slap in the face to the members of the Armed Forces who serve our country that [Trump] is willing to cannibalize already allocated military funding to boost his own ego, and for a wall he promised Mexico would pay to build,” Senate Minority Leader Chuck Schumer tweeted on Tuesday.

The American Civil Liberties Union, which has already sued the administration over past wall construction efforts, immediately announced it will try to block the latest reallocation in court.