The week of September 20-27 has been designated by a handful of activist and lobbyist groups as a “Global Climate Strike and Week of Actions.” The objective is to encourage people to skip work and, for students, to skip school, go out and block traffic, picket offices and businesses, and generally disrupt people’s ability to function in their daily lives. It is a massive temper tantrum orchestrated to intimidate legislators and citizens into supporting a radical climate change agenda that nobody really supports.

While we fully respect every citizen’s right to speak out, peaceably assemble, and petition government for redress of grievances, this thing (for lack of an adequately descriptive term) raises some questions. 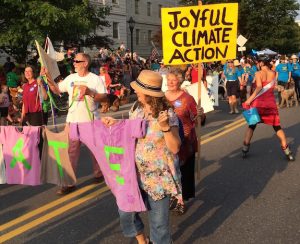 Climate warriors are expected to flood the streets during the Global Climate Strike.

First and foremost, many public schools are actively encouraging and enabling students to participate, even though similar but smaller demonstrations at the Strolling of the Heifers parade and the blocking of traffic in Montpelier earlier this year involved illegal activity by school aged children and young adults.

The organizations pushing the Climate Strike have a clear political agenda and, in the case of VPIRG, for example, lobby on behalf of special interests with a substantial financial stake in the legislation this mob will ostensibly be demanding. So, is this a legitimate educational mission, or is it the systematic political indoctrination and exploitation of young people at the expense of their genuine education? We think the latter.

We also think it adds insult to injury when Vermonters pay some of the highest property taxes in the country, and by some estimates as much as $23,000 per student to attend our public schools, and the schools are using that money to send our kids out on the streets for the express purpose of creating mayhem in our daily lives.

If you as parents and/or taxpayers agree, now is the time to press your local school boards as to what their role and policy is regarding students and the “Climate Strike.” Are your schools encouraging participation? Are they making special allowances for participation? Are teachers involved and in what way? Is taxpayer money being used to facilitate participation? Are students being exposed to arguments on all sides of the issue or just one?

Second, although the strike is being billed as “peaceful” protest, actively blocking traffic and people’s access to buildings and services is not peaceful. Physically stopping someone from going from point A to point B is by its nature an act of force backed by the threat of violence. It is not peaceful.

As noted above, the stopping of traffic in Brattleboro and Montpelier were illegal acts, as was the disruption of State House business back in May. We can expect more illegal acts to take place during the week of the 20th-27th. The Ethan Allen Institute sent a formal letter to Governor Scott, Attorney General T.J. Donovan and every mayor in the state asking if they have plans in place for preventing or minimizing the impact of these actions on the lawful activities of non-participants, and if they are fully prepared to support the arrest and prosecution of persons who break the law.

As of this writing (August 30), we have received no responses after ten days. Maybe they need to hear from you as well.

9 thoughts on “EAI: Are you ready for the ‘Climate Strike and Week of Action’?”