President Donald Trump’s suggestion that children brought to America illegally get legal status only as part of reforms by Congress to immigration law sounds like good news, Republican lawmakers told The Daily Signal.

“What I think you are going to see is with DACA being gone, it gets rid of the magnet of drawing people over here, thinking they are going to come in and get amnesty,” Rep. Ted Yoho, R-Fla., said in a phone interview Wednesday with The Daily Signal. 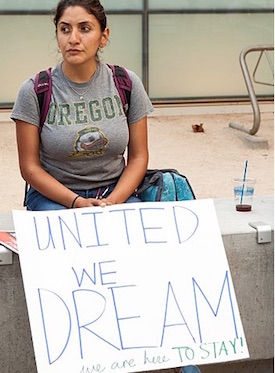 Trump signaled that he could support passage by Congress of amnesty for those brought here illegally as children.

Trump signaled Tuesday that he could support passage by Congress of amnesty for those brought here illegally as children. He did so shortly after Attorney General Jeff Sessions announced an incremental end to President Barack Obama’s unilateral protection for them, known as Deferred Action for Childhood Arrivals, or DACA.

Under DACA, about 800,000 of this illegal population — whom some call “Dreamers” — applied for work permits and remained in the country without fear of deportation.

“I think that the good thing that has come out of this is … the catalyst to get immigration finally fixed for this country,” Yoho said. “There’s been a failure of our government to deal with this for the last 36 years, so I think this is something that will be good overall.”

A process could be worked out so children brought here illegally and who otherwise aren’t law-breakers may attain legal status, he said.

But Rep. Matt Gaetz, R-Fla., told The Daily Signal in a phone interview that he would not back an amnesty initiative.

“I do not support a one-off amnesty bill for the DACA population,” Gaetz said. “In the absence of a secure border, I don’t believe that Congress will ever have the trust of the American people to provide amnesty to any group, no matter how sympathetic their story may be.”

The Washington Times and other outlets reported in May that illegal crossings of the southwestern border had decreased by 76 percent since Trump was elected president.

“I hope that the outcome is not a blanket amnesty, because I think that a blanket amnesty would be the wrong way to resolve an issue of people who come to this country illegally, and furthermore would encourage more parents overseas either to bring individuals over illegally or to just send their children over,” Harris said in a phone interview.

Yoho said he envisions addressing the illegal population as a process, perhaps beginning with those who arrived as children.

“The goal was not to deport anybody, but identify yourself so that we can start working through a process,” Yoho said, “and then there would probably be some type of a probationary period, say five years, where the person has permission to be in this country legally for a five-year period.”

And if during that time they run afoul of the law, they’ll have to deal with that. If it is a serious penalty, they’ll be deported. And then those people who go through that five-year probationary period, they would get a more permanent status until this would afford a person a way that they could stay in this country legally. But our recommendation would be for those people that stand up and identify themselves, there will be a fine paid, a background check will be run on them, and that gives people a chance to identify themselves so they can get a legal status.

Rep. Dave Brat, R-Va., said reforming the education system and improving the labor market are part of the immigration solution.

“I kind of have a different view than I ever hear in the media from anyone,” Brat told The Daily Signal in a phone interview:

If you think about immigration, the fundamental issue at stake is jobs. And so then, if you think it through, you say, ‘We have major problems in the labor market, right?’ Even though the unemployment rate is low, say they can’t find any skilled work, you say, ‘So why is that?’ Because we have a K-12 education problem, and we need to solve that.

“At a bare minimum we have to have E-Verify done, and then we have to solve the chain migration problem before we even begin to move forward,” Brat said. “That will show credibility if the other side says, ‘OK, we’ve got a problem, we’re going to solve it.’”

In a statement provided to The Daily Signal, Sen. David Perdue, R-Ga., said legislation he introduced in February with Sen. Tom Cotton, R-Ark., would help address illegal immigration as it emphasizes merit-based legal immigration. Trump has come out for the bill, called the Reforming American Immigration for Strong Employment Act, or the RAISE Act.

“We cannot repeat the mistakes of the past with a comprehensive immigration bill that does not work,” Perdue said, adding:

The RAISE Act’s changes to our legal immigration system should be part of the solution. I will continue working with Senator Cotton and my colleagues to advance this merit-based system that is pro-worker, pro-growth, and proven to work.

He wanted a responsible timeline for winding things down, and he put the issue rightly back in the hands of Congress. Now we have time to have this debate, and I’m hoping the end result will be something consistent with what we told you all when you sent us here.

Rep. Jim Banks, R-Ind., said he thinks Congress will act on the situation of this population, but likely not this month.

“September is an awfully busy month with just 10 more legislative days before the end of the month … so I don’t anticipate it happening in September,” Banks told The Daily Signal in a phone interview. “But beyond that, sometime over the next few months, we have an opportunity to do something significant with securing our borders and addressing the issues related to illegal immigration and reforming the immigration process.”

One thought on “Trump correct to put ‘dreamers’ in the hands of Congress, GOP lawmakers say”