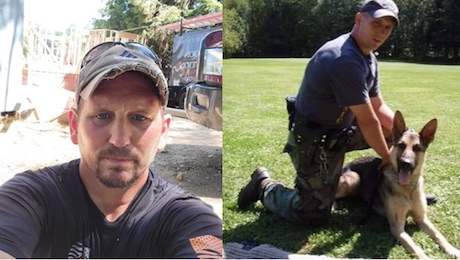 Council documents say that on October 6, 2018, Officer Moriglioni, suspecting the driver of a traffic stop was hiding evidence in his mouth, grabbed the man by the neck in an effort to prevent him from swallowing it:

Officer [Ryan] Prince returned to where Mr. [Michael] Geiger and Officer Moriglioni were standing, and apparently noticed Mr. Geiger may have had something in his mouth, as Officer  Prince asked Mr. Geiger whether he was sucking on a mint.

Mr. Geiger indicated that he was not. Officer Prince then asked what was in Mr.  Geiger’s mouth, to which Mr. Geiger responded that it was his tongue.

After roughly 25 seconds of Officer Moriglioni squeezing Mr. Geiger’s throat, Mr. Geiger spit out what appeared to be a small plastic bag. Mr. Geiger was then placed under arrest.

The report does not specify what, if anything, the bag contained. According to his Facebook page, Moriglioni served with the Springfield PD for 20 years, as a patrol officer, detective, and firearms instructor. He resigned on January 6, 2022, writing that day:

“For those that weren’t aware, I resigned, effective today. I am now officially a civilian again. I will greatly miss being out and about and seeing the great citizens of Springfield, helping when I can. I have learned about many of you, your families and friends, your ups and downs. I have seen many young faces grow up into aspiring young adults. I will miss the conversations around the plaza and various businesses with so many characters, sometimes laughing with and at the change in perspectives between generational gaps. I will miss being on foot patrol and the endless waives in my directions and the soft banter with cars in traffic. I hope to see most of ya, if you recognize me. I must thank my exquisite and understanding wife and our beautiful family. I couldn’t have done it without them. To most of my coworkers, i will miss you. You have no idea how much.”

On September 13, The Vermont Criminal Justice Council permanently decertified former Vermont law enforcement officer Travis Trybulski for “conduct in violation of Williston Police Department policies including Fair and Impartial Policing and Investigative Motor Vehicle Stops, during the course of his duty on February 4, 2021.

On February 4, 2021, Williston Police Officer Trybulski conducted a motor vehicle stop of a Dodge Charger with New York license plates, allegedly coming from a Terrace Avenue home where someone had been repeatedly knocking on the door. He made the stop even though another officer said the driver didn’t match the description of the person knocking on the door, a stipulation and consent order between Trybulski and the State of Vermont said.

Trybulski then searched the car (with the owner’s consent) despite having no reason to believe there were illegal drugs in the car, the report said.