The following two charts are from an article in the Bulletin of the American Meteorological Society. The article itself contains complete sources for the data as well as methodology. You can check yourself but the data is solid and the methodology straightforward. 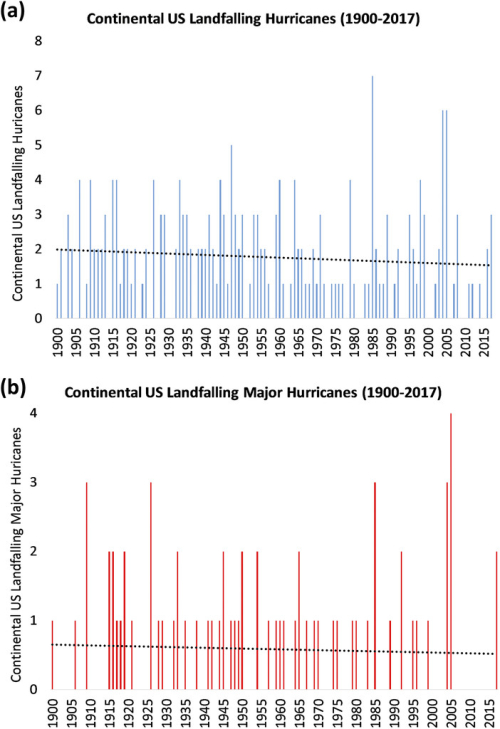 Let’s look at what we’ve been hearing in the news which makes the actual record so surprising.

This is not what the latest UN report says! It is how many politicians and media people choose to interpret the report. The latest report somewhat reduces the high end of its estimate for global warming in the near future. Specifically on the subject of tropical storms its says: “There is low confidence in long-term (multi-decadal to centennial) trends in the frequency of all-category tropical cyclones. Event attribution studies and physical understanding indicate that human-induced climate change increases heavy precipitation associated with tropical cyclones (high confidence) but data limitations inhibit clear detection of past trends on the global scale.” (Section A.3.4 in the Summary for Policy Makers). In other words, we think global warming should cause more tropical storms but we can’t find evidence of that actually happening.

The number of named hurricanes in 2020 set a record

We only name the storms we can see. These days thanks to satellites we see them all. Prior to that we missed many of the storms which stayed at sea. That’s why the American Meteorological Society article only counts storms which make landfall. We do have an accurate record of them. Number of named hurricanes is not a useful statistic on which to base public policy.

In most people’s lifetime, there has been an increase in the number of storms hitting the US

That’s actually true but misleading. Most people haven’t lived as long as I have. If you look at the charts above, there was a very unusual lull in the number and intensity of storms hitting the US between 1960 and 1984. Since then, hits have gone up almost to the level I remember as a kid in the 50s when hurricanes Carol and Diane floated my boat in the street and flooded my basement in New Rochelle, NY.

That’s absolutely true. Again to quote the article from the AMS: “Growth in coastal population and regional wealth are the overwhelming drivers of observed increases in hurricane-related damage. As the population and wealth of the United States has increased in coastal locations, it has invariably led to the growth in exposure and vulnerability of coastal property along the U.S. Gulf and East Coasts.”

Central Park had its rainiest hour ever during Ida

True enough if you interpret ever to mean since 1869 when record keeping began. This is a big country and it is likely that local records which are at most a couple of hundred years old will continue to be set, especially if you look for extreme hours. It’s always useful to ask how old the previous record was to give context. According to the Washington Post, the total for the day of Ida in Central Park was “only” the 5thhighest ever. According to the National Weather Service, the wettest 24 hours in New York history happened in 1903.

Ida tied as the 5th strongest storm to make landfall in the US, again according to the Washington Post.  It shared honors with Laura in 2020 (oh oh) and Last Island Hurricane in 1856. The strongest Atlantic storm we have record of is the Great Hurricane of 1780, which killed more than 20,000 people and incidentally helped the American States win the Revolutionary War with the damage it did to the British fleet.

President Biden is trying to sell an infrastructure plan which is long on questionable green initiatives and short on the kind of infrastructure improvements which actually protected New Orleans from Katrina-like damage during Ida. If Trump had said that, we’d call it a lie; let’s just assume that Biden’s speech writers didn’t read the facts on hurricane trends.

Why does it all this matter so much? The fact that hurricanes hitting the continental US haven’t increased in number or intensity over the last 120 years doesn’t prove that man-made warming isn’t happening. Absence of evidence isn’t evidence of absence. The hurricane record to date does cast some doubt on the accuracy of the models which predicted their increase. But what’s really important is that misdiagnosis and specious attributions even in a good cause lead to bad policy decisions. We can all start driving only electric cars immediately and hurricanes will keep happening. Extreme weather is not going to go away and climate is not going to stop changing even though we may be able to influence its trajectory.

We need good information to make good decisions. That’s not what we’re getting from either politicians or the press in general.

3 thoughts on “Tom Evslin: No significant change in number or intensity of hurricanes hitting US between 1900 and 2017”