How would we respond to Putin if we in the US still imported 62% of our oil as we did in 2007? Where would Europe be if we were competing with them for scarce oil and natural gas rather than providing some of our surplus to reduce their dependency on Russia? If we had left it to Russia, Saudi Arabia, and Iran to be the world’s only super petro-powers, we wouldn’t be able to protect ourselves from domination by them, let alone help Ukraine.

How did we cure our dangerous dependency on imported oil and natural gas? 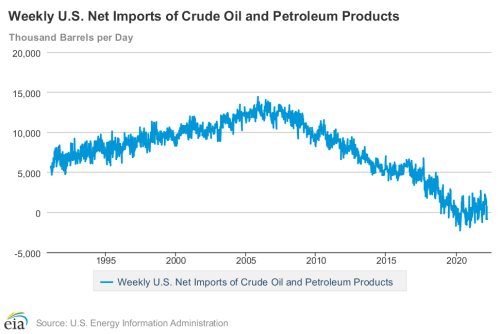 Back in 1973 when we imported only 42% of the oil we consumed, our economy was almost brought to a standstill by the Arab Oil Embargo. Every president since pledged to reduce our imports. Instead, imports and prices rose relentlessly. In 2008 oil prices were higher than they are now (allowing for inflation) and natural gas prices five times as high in much of the country. 62% of our oil products were imported. Natural gas was mainly domestic but production was declining and import terminals were being built for liquified natural gas (LNG). Even in 2011, the best forecast was that net oil imports would stabilize at 60% of consumption and President Obama was calling for reducing that by one third (but didn’t say how).

Around 2008 hydraulic fracturing (yes, “fracking”) and horizontal drilling were successfully deployed, first to recover natural gas from fields formerly thought to be depleted and then to recover oil as well. The price of natural gas plummeted and has never recovered. What had first been planned as terminals to import natural gas became, instead, export terminals. By 2020 we were a net exporter of oil and oil products. BTW, Gazprom in Russia was against our fracking from the first.

[We do still import some oil. Primarily from Canada and Mexico, because some of their wells are nearer our markets than theirs and we export to them in other places for the opposite reason. We also import unnecessarily (even from Russia until two weeks ago) because the protectionist Jones Act prevents us from delivering our own oil to ourselves on foreign tankers and we don’t have tankers of our own. But we still export more than we import.]

If it weren’t for fracking (lousy word but we should get used to saying it and keep doing it) and horizontal drilling, we’d be begging bad guys for more gas and oil and in no position to confront them. We would also not have enjoyed the prosperity we had in the ten years leading up to the pandemic. That prosperity was to a great degree fueled by not having to send money abroad for oil and by increased competitiveness of American factories once we had cheaper energy available than the rest of the world.

Europeans also have depleted oil and gas wells. They decided not to frack or even, for the most part, to invest in new wells. They outsourced their energy needs to Russia. Germany also shut down most of its nuclear plants so had even greater need for Russian natural gas to generate electricity – despite all they had invested in renewables. That’s why Germany was just about to open one more gas pipeline from Russia before Putin’s invasion. BTW, not drilling in Europe didn’t save the world from greenhouse gasses (GHG) – it just moved the GHG sources to Russian drilling (not well-regulated) and burning Russian fuel including coal.

It is not an exaggeration to say Putin’s war is financed by the fuel Europe is buying from Russia and which Europe would be in a world of hurt without.

But what about the environment? 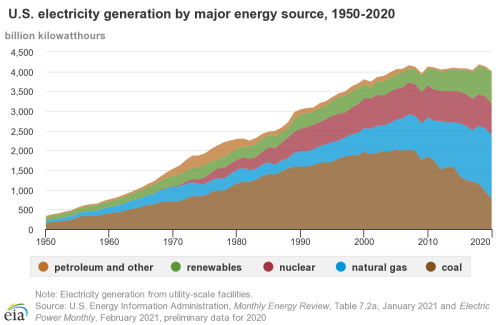 The chart above tells the story. Since fracking was popularized in 2008 and the price of natural gas plummeted, the use of coal to generate electricity in the US has halved and natural gas use has more than doubled to replace it. Renewables have grown as well, partly because natural gas as a nighttime backup makes them more practical. Natural gas emits less than half the GHGs that coal does per kilowatt of electricity generated. 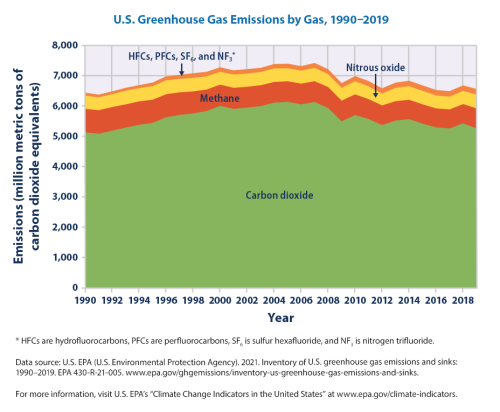 The chart above shows how US GHG emissions have declined. Some of this decline is due to greater efficiency, some to renewables. The bulk of it is from substituting natural gas for coal, something we can and should keep doing.

You may have heard that fracking leads to increased methane emissions from wells. Methane is a powerful greenhouse gas. However, as you can see above, US methane emissions, most of which are from agriculture, have not gone up even though we are producing much more gas and oil than ever before. Horizontal drilling reduces leakage because less than 10% as many well shafts are needed to recover the fuel from a given area.  However, we can reduce leakage especially from oil wells even further, and we should.

Even before Putin’s invasion, Europe realized that natural gas and nuclear are both crucial to meeting carbon targets. Unfortunately, they didn’t realize the danger of outsourcing natural gas supply to Russia. They do now.

Drilling for oil or gas today means fracking and horizontal drilling. We have very little reserves we can tap without these technologies, and they are the cleanest way to produce oil and gas. We are incredibly fortunate that these technologies were deployed when they were, and we will need to continue to use them for years to come. We will reduce emissions further as natural gas continues to replace coal. This doesn’t mean we stop development of no-carbon alternatives including nuclear or that we pause electrification. It does mean that we do not “dis-invest” in fossil fuels until alternatives are available. It does mean that we don’t ever allow Russia or Iran or Saudi Arabia to determine our energy future. It does mean that we get over considering fracking as an obscenity.

[full disclosure: Mary and I founded a company which trucks natural gas to large users not served by pipelines. We’re proud of that but no longer have any operational or significant financial connection to the company.]