If you don’t have cable or fiber to your home and you don’t think you’ll be getting either one of them soon, Starlink from SpaceX may be your next best option. Starlink uses low earth orbit satellites (LEOs) which don’t have the latency problems which make the previous generation of satellite service from Hughes and others unusable for today’s essentials like Zoom. Starlink is plenty good for a family with multiple people learning from home, working from home, and streaming videos.

But if you’re in the northern hemisphere, Starlink needs a view of the northern sky; in the southern hemisphere it looks south. Currently, to provide service without interruption, it needs to see a swath of northern sky about 100 degrees wide and from 25 degrees to almost 90 degrees above the horizon. It is very sensitive to even thin tree limbs which block part of this view.

Although the dish itself only moves as part of setup, it uses electronic tracking beams which lock on to satellites as they zip past in the swath of sky it can look at. Zip is not an exaggeration. The satellites circle the earth every ninety minutes; the satellite serving you now will be serving someone in South Africa 45 minutes from now.

The snapshot above is captured from the website https://satellitemap.space/# which projects the positions of Starlink satellites in real time.  Red ones are in the night sky; streaks are newly launched satellites not yet moved into place.

Zooming in on the web picture gives you a picture like the one below. To be useful, you want to set up your house instead of mine as the green dot. 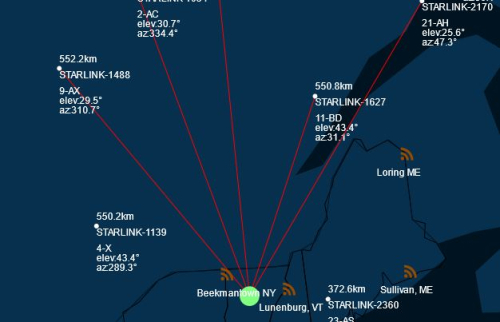 The five red lines going roughly north from my house show that, right this minute, any one of six satellites could be providing me with service. It’s anyone’s guess which one my dish is actually tracking. If you were looking at the real website, you’d see the white dots and the lines move. The two rows of white text associated with each satellite are the two most important. elev (elevation) is many degrees above the horizon the satellite appears from my house. Az (azimuth) is the direction from my house to the satellite. Notice there is no red line from my dish to the STARLINK-1139 at the far left; it hasn’t yet entered the dish’s field of view. Similarly STARLINK-2360 in the lower right is invisible to the dish.

If you stare at the moving display long enough (it is addictive), you’ll get a pretty good idea of whether Starlink is going to work for you. If there is any significant amount of time when there are no satellites eligible to serve your house, Starlink probably won’t take an order from you. There are parts of the world including the US which are not yet well-covered even though there are already about 1400 satellites launched. If there is nowhere you can put the dish where the arc swept by the red lines is always visible from 25 degrees above the horizon to almost straight up, then you are not currently a good candidate for Starlink. If you already have Starlink and the app is showing you that there are interference problems, the moving chart will help you pinpoint them and find a better location for the dush.

BTW, this cool website is not from Starlink or endorsed by Starlink; it doesn’t do tracking cookies; it doesn’t have ads; and it’s free. Good programmers like to do this kind of stuff.

Unfortunately, even if Starlink looks like a good fit, there is a backlog and you probably won’t get the equipment for three to six months after your order. SpaceX is gating deliveries to protect service quality; capacity is increased by the launch of about 60 new satellites each month and by adding new ground stations to bring the signal back to earth like the ones in Beekman, NY (active) and Lunenburg, VT (not yet active) in the picture above. There are also areas where Starlink service is simply not available yet pending a critical mass of orders in the area. You order at http://www.starlink.com with a refundable $99 deposit; but it is possible your order will be not be taken for one of the reasons listed. When your order is ready for shipment, you’ll be billed for the remainder of the $499 equipment charge plus taxes and shipping. Service is then $99/month; no contract and no data caps. You can return the equipment for 30 days for any reason or no reason.

If you like numbers, here are my measurements of Starlink performance: latency (roughly the time between when you click on something and you get a response from some server somewhere) is usually between 35-50 milliseconds, plenty fast. Download speed varies but is usually between 150 and 250 Megabits per seconds (Mbps) and upload between 15 and 35Mbps lately.

You can learn how to use the free app to check for obstacles before ordering at: How to Find Out Free If Starlink Will Work at Your House .

Related posts are at:

2 thoughts on “Tom Evslin: Another free way to tell if Starlink broadband will work at your location in Vermont”