This article by Lou Varricchio originally appeared Aug.31 in the Vermont Eagle. It is republished here with permission.

FERRISBURGH, Vt. — When Ferrisburgh resident and independent-minded Steve Thurston decided to enter the 2020 campaign as a write-in candidate for the Vermont House, covering the towns of Addison, Ferrisburgh, Panton, Waltham, and the city of Vergennes, his decision came prior to the August primary.

The retired homebuilder, a Vermont resident since 1970, didn’t make the decision to run lightly.

As a former member of three school boards, as well as a past member of the Manchester Selectboard, Zoning Board, and Conservation Commission, he comes to join the race with a unique perspective. 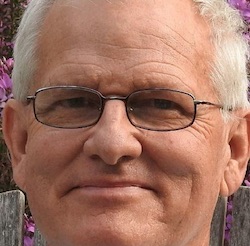 Thurston believed that what he calls “Democrat and Progressive overreach” has impacted every Vermonter through the loss of local control of schools (Act 46) and town planning (S.260). However, Democrats and Progressives can provide a claim of the majority’s will when it comes to election results statewide in recent years.

“Energy mandates like the Global Warming Solutions Act will raise the cost of living with no benefit other than to wind and solar developers,” he said. “Addison County’s farmers are burdened with unreasonable regulations. COVID-19 restrictions have brought Main Street businesses to their knees. We need to focus on the state’s economy, which was anemic before the pandemic and on life support now.”

Thurston and his wife Monique Thurston, a past GOP candidate, is active in promoting regulations for safe industrial wind-turbine noise levels in Vermont and Maine. But he’s also become a strong supporter of law and order in a lawless time.

Thurston called out local incumbent Representatives Matt Birong and Diane Lanpher. He claims they have voted to raise the cost of living and take away freedoms and local control. He also is angered by the duo voting themselves a pay raise while many Vermonters lost employment during the pandemic.

The Eagle is reaching out to both legislators to respond to Thurston’s claims.

He also reported that he attended a pro-police rally in Montpelier in July and was appalled at the uncivil behavior of anti-law enforcement protestors.

“The rally began as a peaceful event, with an invocation, the National Anthem and Pledge of Allegiance. Within minutes, as speeches began of policemen saving lives and helping people in difficult situations, the words were drowned out by a growing group of young people holding signs and chanting ‘black lives matter’, ‘defund the police’, ‘no borders, no prisons’ and vulgar things I cannot repeat here… This was my first personal encounter with Black Lives Matter and Antifa. But I recall when Black Lives Matter activists stormed the stage at a Bernie Sanders campaign event in 2015 and he meekly turned his microphone over to them.” He added, “They do this under the guise of establishing ‘racial justice’. They call ‘white supremacy’ the problem and ‘reparations’ the solution. They say people should feel guilty about being born with white skin and need to apologize for the actions of long-dead Americans. Last week the Progressive Burlington City Council voted to establish a task force to study this issue.”

Thurston doesn’t mince words even though he lives in a county where Democrats, Progressives are the political majority.

And while he appears to be all for improving black lives, his campaign material indicates that the organizations are more about extreme leftist politics than about improving individual black lives.

“Black Lives Matter and Antifa are extreme leftist organizations, led by self-described trained Marxists, and fully supported by Democrats and Progressives,” he said.

In the few months remaining until the November election, Thurston will focus on law and order measures as well as on Vermont policies that cost too much for farmers and other taxpayers to bear; he will likely continue to call out groups that he and other conservatives believe are behind recent social disruptions and lawlessness.

“What I witnessed in Montpelier was Vermont’s timid version of what we are seeing in major cities every night on the news: citizens’ rights trampled; public and private property occupied; windows smashed, businesses burned and looted; police officers attacked with rocks, sticks, and bottles; statues of historical figures destroyed; all amidst calls for the dismantling of police departments by leftist mayors and city council members. In Vergennes, the mayor and four of seven city council members have resigned over backlash from the mayor’s proposal for an unelected citizens committee to oversee the Vergennes Police Department.”