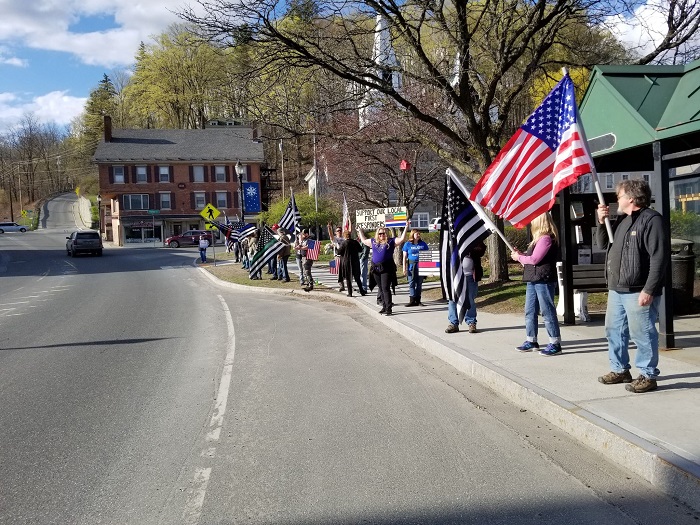 SUPPORTING POLICE: Residents in the town of Springfield don’t all agree Blue Lives Matter flags are appropriate for display on public property, echoing similar debates about Black Lives Matter flags. But at an April 19 rally in Springfield, a group of local supporters held a rally to show their solidarity with police.

The Springfield Police have been flying “thin blue line” flags to support for local law enforcement and their families, but some residents in town are upset and allege the flags are too political.

“I have received a few comments from concerned citizens on the thin blue line flag,” Springfield Town Manager Jeff Mobus told True North last week in an email. “I’m heartened that in the communications I’ve received on this issue that every comment about the Springfield Police Department has been positive.”

However, he added the flag itself has generated controversy among some residents in town.

“The concerns that I’ve received question the appropriateness of using the thin blue line flag on public property to show that support,” Mobus said. “Should it develop that the town needs to take a position, I would schedule a discussion at a future Selectboard meeting and have a public discussion of the issue.”

Mobus would not say who has filed complaints. However, he told True North that complaints have not come “from the Windsor County Democratic Committee as a whole,” and that he is unaware if the party has a position on the flags.

The “thin blue line” flag resembles an American flag but has a blue stripe to express support for law enforcement. Racial justice advocates argue the banner is a symbol of white supremacy and signifies opposition to the Black Lives Matter movement. 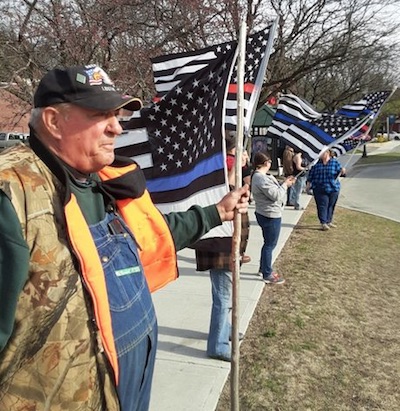 On April 19, local residents aware that some in town are complaining about the flag held a rally to show their support for local police.

Lisa Young, a resident of Springfield and the treasurer of the Springfield Republican Committee, attended the rally.

“We wanted to show our support, so we organized a small rally of support for our police and first responders in downtown Springfield,” she told TNR. “We tried to keep it relatively small and not post about it publicly, out of concerns of backlash from the opposition. As it turned out, about 25 people participated, and the response from passers-by was extremely positive.”

She added that she thinks leadership within the Springfield Town Democratic Committee have been filing complaints with city officials about the presence of the pro-police flag.

“From what I understand, [members] of the Springfield Dems … contacted the town and the fire department to complain about them having thin blue line flags and signs on town property,” Young said. “The Springfield Republicans found this appalling and wanted to show our support.”

True North reached out to Char Osterland, chair of the Springfield Town Democratic Committee, and Springfield Police Chief Mark Fountain to find out who is filing complaints. Neither Osterland nor Fountain returned TNR’s repeated requests for comment.

However, Chuck Gregory, a Democrat and resident of Springfield, spoke with TNR, but discussed policing in general and did not address the flag controversy.

Speaking for himself and not the Springfield Democratic Committee, he cited statistics that suggest police work may not be as dangerous as some think. He said a comparable percentage of workers across several professions have died over the past year due to COVID-19.

“If cops are being killed in the line of duty, what about civilians dying from Covid-19 simply to keep the economy going and keep their families fed, housed and clothed, exposing themselves hour after hour to co-workers and customers who might fatally infect them?” he said.

Gregory said policing has “a fraternity mentality in which it is very easy to engage in outcompeting one’s peers, even to the point of engaging in unethical, illegal or immoral conduct.”

As violence has escalated in cities across the country, public opinion is turning in favor of police and away from social justice movements. In a four-month span from June to September 2020 public support for Black Lives Matter fell 12 percentage points.

A recent poll by Skeptic Mag shows that Democrats may be out of touch in their perceptions of police violence. Forty-four percent of liberals were convinced that at least 1,000 unarmed black men must have been killed by police in 2019. The actual number was 25.

1/n A recent nationally representative survey commissioned by Skeptic Mag asked respondents to estimate the number of unarmed blacks killed by police in 2019. Overall, 44% of liberals guessed 1,000 or more as compared to 20% of conservatives (this calculation is based on the.. pic.twitter.com/WvCvij3SF3