By Kenny Xu | The Daily Signal

We all thought those online quizzes that give you a score based on “how privileged you are” were funny. Except now, the score is real — and it will affect your life dramatically if you’re an anxious high schooler applying to college. 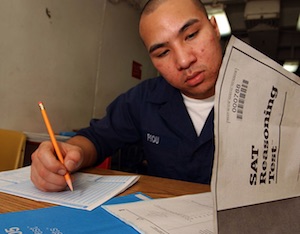 The adversity score will consider “15 factors,” according to the report, including the student’s socioeconomic status, the neighborhood crime rate, and parental education level.

A new report by The Wall Street Journal describes the efforts of The College Board, the private organization behind the SAT, to implement an “adversity score” to track the hardship of a test-taker’s circumstances.

The adversity score will consider “15 factors,” according to the report, including the student’s socioeconomic status, the neighborhood crime rate, and parental education level.

Race won’t explicitly be a factor, so the College Board can avoid lawsuits over racial discrimination and preferences, which are illegal by federal statute. However, scholars who have commented on the new feature have acknowledged that “the purpose is to get to race without using race,” in the words of Anthony Carnevale, director of Georgetown University’s Center of Education and the Workforce.

Notably, students will not be told what their adversity score is, thereby rendering them oblivious to a critical factor in the college admissions process—and powerless to address any perceived inaccuracy.

This policy change comes at a time when SAT opposition movements have become increasingly vocal, and college admissions has come under heightened scrutiny due to the recent college bribery scandal involving Lori Loughlin and Felicity Huffman.

Of course, many colleges and universities already have their own ways of determining how underprivileged a student is, and accordingly, how much they should consider these factors in admitting said student. There is, in fact, an ongoing lawsuit against Harvard University for using exactly this sort of “privilege scale,” of which race is a factor, according to the plaintiffs.

But the addition of the adversity score on the SAT is the boldest and most explicit move yet by the top college admissions gatekeeper in the country to attempt to pre-empt a student’s ability to control his own narrative when applying to college.

Only a few of the 15 factors used to determine a student’s adversity score have been revealed. But it’s unlikely that any of them will include irregular hardships, such as “My father died when I was little” or “I was bullied in middle school.”

The College Board’s overreaching attempt to determine what constitutes “adversity” for millions upon millions of high school students in America will inevitably capture only certain visible, easily researchable fractions of a student’s experience—a small portion of who they really are.

After all, the aspects that usually affect students’ lives the most are not easily researchable and are not stored in the public databases the College Board plans to mine. The sweeping, collective generalizations this adversity score will make about a person will hinder a student’s ability to craft his own story and advocate for himself.

Imagine, for example, that you are a high school student writing a college essay about your service trip to Costa Rica. If you had an adversity score of 20 (a low adversity score), the admissions officer might question your intentions or the privilege you had to go to Costa Rica.

But if you had an adversity score of 80 (a high adversity score), the admissions officer might be skeptical that you even went on the trip, uncertain about how you could afford such an endeavor.

The adversity score has the potential to invite all kinds of unwelcome stereotypes to creep into the college-admissions process, factors that the student cannot quell or control, since he doesn’t know his own adversity score in the first place.

The score will also homogenize college applications and stifle real diversity in the name of artificial, surface-level “diversity.” Once students (and perhaps more importantly, parents of students) figure out what factors the College Board emphasizes in their adversity score, they will seek to emphasize only those parts of themselves that fit into the College Board’s adversity criteria.

A unitary and opaque algorithm designed to explain the full breadth of your circumstances doesn’t sound like real diversity at all. It sounds like social engineering.

One defense of the adversity score centers on the fact that it will help uplift applicants from poor or underprivileged backgrounds, by showing that their somewhat lower SAT score can be attributed to meager circumstances.

It may well be true that schools should factor in a student’s circumstances in their selection process, but it is not the College Board’s job to decide whose life is more difficult than another’s, especially without personally consulting the student.

Rather, it is the student’s job to use the personal statement to highlight his best qualities in the most challenging of circumstances. An adversity score would pigeonhole a student before he even gets the chance to speak for himself.

The absurd thing about this whole initiative is that the College Board was founded and still functions primarily as a test-takingservice. When people take tests, they should not expect the bar to be set lower for them. But the College Board is now moving the goalposts for every person who takes the SAT, thus betraying the very purpose of its main product.

Despite the anti-SAT brouhaha that has emerged over the past few years, an objective standard of merit is still necessary to conduct a functioning college-admissions system. There must be a way for colleges to adjudicate between students with similar grades at different schools. Otherwise, they risk admitting a student who would not fit intellectually with the rest of the class.

For a long time, the College Board defended the SAT as the test to fit this role of objective gatekeeper. It’s simply not possible to take this argument seriously if the SAT’s own parent organization says it needs an “adversity balancer.”

The SAT is not a perfect predictor of scholastic capability, but there’s a strong case to be made that is a necessary feature of a societally beneficial college-admissions system. The College Board just gave up on defending that argument—and with it, the rationale for the relevance of its own test.