A 2018  Republican candidate for the Vermont House has taken an unusual step in a hunting-related lawsuit brought against him by the state — he wants the court to deny the state’s recent motion to dismiss the case.

Kevin Hoyt, 49, is known to Vermont hunting enthusiasts as a Gen7 Outdoors TV Channel personality, a firearm rights advocate, and a past state legislative candidate. In April, however, he was charged with a hunting violation and with impeding a game warden. 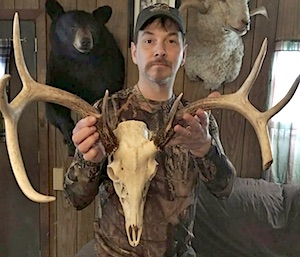 Kevin Hoyt, 49, of Bennington is known to Vermont hunting enthusiasts as a Gen7 Outdoors TV Channel personality, a firearm rights advocate, and a state legislative candidate.

An affidavit filed by the Fish and Wildlife Department in Bennington Superior Court Criminal Division claims the hunter took one deer more than the state’s three-deer limit. Hoyt claims he shot one deer on Nov. 13, 2018, but it got away, and he didn’t find it until February 2019.

In February, a photograph posted to Hoyt’s Facebook page of the deer head and antlers triggered a run-in with Vermont Fish and Wildlife Department Warden Travis Buttle at the hunter’s Bennington residence.

The charges against Hoyt were dismissed Friday by the State’s Attorney’s Office, but on Monday Hoyt asked a district court judge to deny the state’s motion to dismiss the charges against him and to proceed to trial. The hunter said the charges were politically motivated and that a trial is necessary to clear his name.

According to Hoyt’s Motion to Deny the State’s Motion to dismiss, the entire case is an unfair smear against him launched at the urging of state Rep. Chris Bates, D-Bennington, his opponent in the 2018 election.

“The Defendant is now in a dangerous position being stalked, followed, harassed, threatened and the abuses by the state continue and intensify. It was revealed in Discovery that the State’s main witness and person that started this all, Representative Chris Bates from the Bennington 2-1 district, is actually a wanted fugitive from the State of Illinois,” Hoyt wrote in the filing with the court.

In a video posted on his Facebook page, Hoyt said “no one will arrest him [Bates] because he is a Democrat politician.”

On Friday, Seven Days reported that the Bennington representative has an outstanding arrest warrant in Illinois over a failure to appear in court and pay fees related to a third DUI, a felony offense.

Bates said late last week he has contacted Vermont law enforcement officials and was told “there are no plans by authorities here to initiate any court or law enforcement action relating to the satisfaction of these post-resolution terms and conditions,” the Bennington Banner reported.

The revelations about Bates caused the Bennington representative to issue a public statement Friday about his prior legal issues in Illinois. He said “certain indiscretions” in his past stemmed from events mostly in his late teens and 20s, but also that he “learned in the last week that [he] did not entirely satisfy all of the terms and conditions attending to the resolution of one of these Illinois incidents.”

The legislator also denied there were arrest or extradition warrants against him, and said Vermont is “a place of great compassion and forgiveness.”

In his motion against the state’s move to dismiss the case, Hoyt outlined a series of reasons why he wants legal action to continue:

The timing of the state’s motion (to dismiss the case against the defendant) is disturbing at best and the defendant does not believe this was a just decision. The decision as it stands further damages the defendant and leaves him with additional real danger. The defendant made the claim that this was about political collusion and targeting from his first appearance at the arraignment for this case. Now that the defendant can prove that statement and has obtained the evidence of criminal behavior by the state and several politicians and high powered officials, he believes it to be unfair to just dismiss this case without prejudice and without accountability or at least exposure for the real criminals.

Beyond the basics of the hunting-violation charge, Hoyt has alleged that certain Vermont officials began targeting him after the election. At an earlier arraignment, he told the court that the case was not about a dead deer head or impeding a game warden. “Instead (it) was direct targeting to destroy conservative opponents,” he said.

Hoyt also alleges that the office of Bennington County State’s Attorney Erica Marthage “falsified or tampered with and manipulated” items relating to the state’s case against him. Marthage’s official website notes that, as a rule, the state’s attorney’s office “hold(s) individuals accountable but avoid(s) the long term stigma associated with a permanent criminal conviction.”

Hoyt believes he is being harassed by the state and now places Bates at the center of it all.

“Rep. Chris Bates … is actually a wanted fugitive from the state of Illinois. The extensive felony criminal record, outstanding and extraditable warrant and reward for Mr. Bates was ignored by the state as they tried to work with this wanted criminal to destroy the defendant (me),” Hoyt wrote in his motion to the court.

He added that Bates’ criminal record “shows a long history of a violent and dangerous individual with multiple battery charges, multiple aggravated and simple assaults, resisting, eluding and fleeing authorities and violence against police.”

Members of Vermont Gun Owners have supported Hoyt during his ordeal, and some postings now call for Bates’ dismissal from state office.

On the deer charge, Hoyt claims there is no code violation involved in picking up a deer carcass at any time of year.