It seems that there isn’t a prominent progressive left in America who hasn’t come out in favor of abolishing the Electoral College.

The latest is Sen. Bernie Sanders, I-Vt., who called for an end to our 200-plus-year-old presidential election system on Twitter earlier this month.

Sanders didn’t explain why he wanted to ditch the Electoral College (it was a tweet after all), but it’s interesting that as a senator from a small state, he has benefited enormously from the supposedly “undemocratic” nature of the American political system.

So much for one man, one vote. 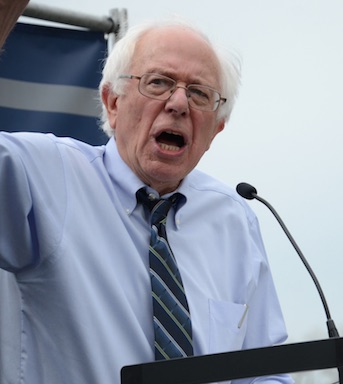 Suggesting that the Electoral College defeat for Hillary Clinton suddenly means that it is outdated or doesn’t work is without merit.

As a hypothetical, let’s say the shoe was on the other foot, and that Republicans currently had an Electoral College disadvantage. Would the mainstream media still be focused on abolishing the institution or running countless stories about how the GOP can’t win over voters and needs to abandon conservatism to win?

It doesn’t take long to answer that question.

As I’ve written before, the Framers of the Constitution created the Electoral College as a way to select presidents who could gather broad-based support around the country.

The system is somewhat skewed in favor of small states, as the total number of Electoral College votes of each state is dependent on the size of a state’s Senate and House delegation.

Since every state has two senators, small states have that edge, though not so much that the large states aren’t still far more important to win.

The implications of this are twofold. Small states collectively can check the power of large ones, and more importantly, presidential candidates mustappeal to states as states, not to the nation as a giant, undifferentiated mass.

Even some blue-leaning states have grasped this, as Maine and Nevada recently rejected proposals to join the National Popular Vote Interstate Compact movement.

As my colleague Hans von Spakovsky wrote: “Under the compact, smaller states like Maine and Nevada would suffer the most under the inevitable tyranny of the most populous states.”

In that sense, the Electoral College is “undemocratic,” as is much of our political system. The Bill of Rights, for instance, is highly democratic. Certain individual rights have been protected from majoritarian rule.

The Founders had differing views on democracy, but few saw it as an unalloyed good. The current system, where states rely on a popular vote to select electors provides that balance of both federalism and democracy.

It preserves federalism (and minorities’ rights), protects the system against election fraud, and has produced a remarkably stable system for selecting presidents in the world’s oldest constitutional republic.

As Alexander Hamilton wrote in Federalist 68, the Electoral College isn’t perfect, but it is “excellent.”

Why would we want to change now?

There have been countless distortions about the original intent of the Electoral College in this debate, as well as more serious criticisms, but the tenor of the movement to abolish it is veering toward naked partisanship.

Democrats won solidly in the Electoral College as recently as 2012, in which the so-called Rust Belt—comprising states such as Michigan, Wisconsin, and Pennsylvania—was considered a “Blue Wall” and impenetrable for Republicans.

It took a candidate like Donald Trump, with a very different message, to break through and win, as Clinton ignored the region to target other voters. That served to boost her popular vote totals—but cost her the election.

Far from an indictment of the Electoral College, the 2016 results showed how the system is supposed to work.

Again, presidential candidates have to appeal to states as states. While Pennsylvania, for instance, had been a reliably blue state in presidential elections since the 1990s, voters were trending in another direction. The right candidate—Trump—flipped the state into the red column.

Now, our national conversation has changed to focus more on the concerns of Rust Belt voters,  as that region becomes a political battleground.

That’s a healthy development for a vast, diverse republic.

An empire may ignore the opinions and interests of places far removed from the centers of power, but a representative republic cannot do that if it wishes to survive.

Many on the left can’t handle that dilemma, and now want to change the rules of the game so they don’t have to bother winning back voters who cast their ballots for Democrats less than a decade ago.

It absolutely follows the pattern of the modern left. From the Senate to the Supreme Court, the American left turns immediately and ruthlessly against any institution it doesn’t control.

Not only are the small states that the Electoral College benefits fairly evenly divided between the parties, there is certainly no guarantee that the current urban/rural split will continue in the future.

It perhaps would be a more productive use of time for those on the left to assess why they are losing voters, rather than frantically trying to change the rules of the game to simply cut them out of the equation.

Fortunately, the Founding Fathers predicted human frailty and shortsightedness, and crafted a Constitution that was hard to change, except by the high bar of the amendment process—which the National Popular Vote Compact is intended to circumvent, albeit unconstitutionally.