Remember the Champlain Flyer? That was Howard Dean’s commuter train that ran 13 miles from Charlotte to Burlington. After three years’ operation and spending $27 million, the little used Flyer was mothballed. 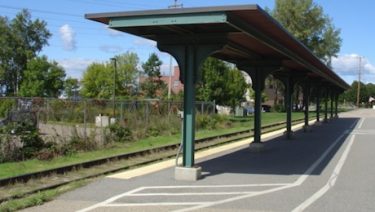 The Burlington Union Station platform. This was used for the Champlain Flyer between 2000 and 2003.

But now eco-entrepreneur and subsidized wind power mogul David Blittersdorf has a brilliant new idea: Run a subsidized commuter train from Barre to Montpelier, a distance of seven miles. Blittersdorf just happens to own five refurbished Budd rail cars himself.

Blittersdorf told VT Digger May 26: “We are fixing up these Budd cars at the old Bombardier plant, and trying to get the state to use them. We’re getting a little resistance. They’re going to get on the rail line somehow.”

Blittersdorf’s allies slipped a provision in the transportation bill conference to have VTrans study his project including “greenhouse gas reduction/increase of operating diesel-powered railroad cars, compared to alternatives.” There are already bus lines serving Montpelier, Barre and Berlin, but Blittersdorf doesn’t own any buses, just rail cars.

It’s against the rules of the legislature to add new provisions to a bill coming out of conference, but apparently no one caught on and raised a point of order.

This latest scam illustrates once again the enthusiasm of certain entrepreneurs to sniff out, or help create, ever more subsidized programs to fight the menace of climate change, then make money from them, until they fail, as the Blittersdorf flyer surely will.

12 thoughts on “McClaughry: The Blittersdorf Special”