Republicans were a super-minority in both chambers of the Vermont General Assembly this year, meaning they had less than one-third representation in the House and the Senate.

The development took away important leverage for the party, because it takes at least one-third representation to uphold a veto by a sitting governor — in this case, Republican Gov. Phil Scott.

Democrats and Progressives, in contrast, began the year positioned to pass almost any legislation they wanted, despite opposition from the governor. 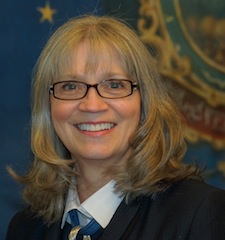 The job of leading the minority caucuses fell to House Minority Leader Patricia McCoy, R-Poultney, and Senate Minority Leader Joe Benning, R-Caledonia. The two Republicans were as surprised as anyone that Democrats and Progressives failed to pass the ambitious agenda they outlined in January.

According to McCoy, the two priority measures that spectacularly failed to pass at the end of the session — a $15 minimum wage and paid family leave — did so because Democrats and Progressives simply didn’t do what was necessary to get the job done.

“Well, I didn’t think that either bill was ready for prime-time,” she told True North. “I thought at the end of the session they were really trying to push something that wasn’t fully vetted, and it was being handled behind closed doors and no one really knew what was going on. I don’t feel it was good governance.”

She said her caucus simply lacked control over most of the legislative process.

“We can vote not to suspend rules; that’s the only thing we had with only 43 [members],” she said. “[The majority] could have extended the session if they had come to some sort of a deal, but we were already one week past the deadline at a cost of $50,000-$60,000 dollars a day to the taxpayers.”

Still, dozens of bills were passed by both the House and the Senate, and McCoy said she feels good about some of the progress made this session, such as expanding broadband to remote workers and funding child care.

“There were some pretty good things as far as child care funding — I agree with that. We continued to work on workforce development and economic development, and this state desperately needs to go in that direction,” she said.

On the hottest issue of the session, abortion, McCoy says she is pro-choice. However, she voted against both H.57’s unrestricted right to abortion, and also the Proposal 5 constitutional amendment guaranteeing “an individual’s right to personal reproductive autonomy.” Both pieces of legislation, many argued, would codify legalized abortion without restriction up to the moment of birth.

“[A constitutional amendment] is a long process, but still, it’s big. I think we would probably be the first in the country to actually open up our constitution to do that,” she said.

McCoy said she expects paid leave, minimum wage and marijuana commercialization to be top priorities for Democrats and Progressives again next year.

Vermont state Sen. Joe Benning, R-Caledonia, has a small caucus to look after in the Senate.

“I think what you saw there [at the end] was a whole lot of posturing between the speaker of the House and the president pro-tem, and we Republicans were really not part of the conversation in any way, shape or form,” Benning said.

He added: “The situation was unfortunate — I think we could have ended the session a week prior on that Saturday and been done. … I think the taxpayers were the people who lost at the end.”

On the issue of paid family leave, Benning said an opportunity was missed because the majority Democrats refused to give serious consideration to a two-state paid leave program introduced by Scott and New Hampshire Gov. Chris Sununu at the start of the session.

“I thought we had an historic opportunity for two governors to come together,” he said. ” … The opportunity was there to at least get a benefit to people who don’t have it.”

The proposed joint-venture has since generated talk about bringing Connecticut into the plan. Benning said he hopes such an expanded vision for the program might invite a more serious consideration by Democrats and Progressives.

One legislative development the Senate minority leader praised was the break-up of the Senate Chittenden district, which currently sends a mix of six Democrats and Progressives to the upper chamber each year without fail.

“To me, as a resident in the Northeast Kingdom, that was one of the most significant things that could have happened,” Benning said. “It raises the possibility that there will be a more widely distributed voting pool next time around in those two separate districts. The high concentration of downtown Burlington is not gonna be as effective as whatever second district there is.”

He said in 2020, after the census, they will go through reapportionment, and a new district will be designed. The new law will state that there should not be more than three senators per district throughout the state.

4 thoughts on “Super-minority leadership reflects on session’s wild ending, what comes next”