The stage is being set — people are being mobilized by propaganda. Make no mistake: Bernie Sanders is all about division and fighting. That’s classic Saul Alinsky, and right from the textbook on how to subvert a government.

In VTDigger on Wednesday, it was announced that Sanders is asking everyone to protest former Wisconsin Gov. Scott Walker coming to speak in Vermont. Notice Sanders doesn’t want to debate, he wants to protest. That’s classic Alinsky. So, who’s creating the division?

The left can only win by division and fighting. It’s their main game plan — not peace and prosperity. They’ve done this framing many times and are absolute pros at this. 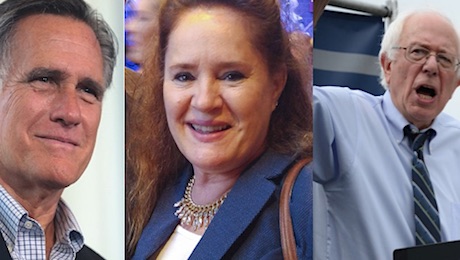 In the previous election, with former Republican presidential candidate Mitt Romney, the Democratic National Committee side of things started framing the man before he even was nominated. I think half the Republican National Committee was against him too, which was certainly of no help. The framing of Romney was that he was “out of touch,” “not with the common man,” “rich” and “connected.” Mitt had no idea with whom he was dealing. His life had been working with businesses and groups of people who were trustworthy; he would have avoided any drug dealers, propagandists or multi-level marketers. He was not taught the school of Alinsky. So they framed him, just like they do for everyone. They won on lies.

Romney should have embraced who he was and framed himself: “I’m good with people’s money. I’m responsible. I’m not cool or famous, I’m not hanging out with movie stars. I’m not a slick talker. I am loyal, responsible and I love this country.” But nope, it didn’t happen. Instead he took the bait, he was totally framed by his opponents, and we got another four years. Count this a massive victory for the propagandists.

You’ll notice that everyone is trying to frame VTGOP chair Deb Billado, as well. She’s not even running for office, so why is this happening? She’s constantly in the headlines of VTDigger and Seven Days, which are attempting to frame her and get her out of leadership. There are also RINOs (Republicans In Name Only) in Vermont that want her out. Yet there are many who say the only reason they remain in the Republican Party is because of her. To these people, she brings hope; she honestly wants to bring people together and create positive change.

Since Deb Billado is dangerous for Vermont’s status quo, she will be framed. There will be many traps, just like were set for Mitt Romney. As you can see from Bernie’s presidential campaign, the framing is in full force — they are trying to suggest that Gov. Phil Scott is like Scott Walker. If they can frame and remove Deb and Phil, they’ve achieved their goals.

So here we sit with Scott Walker, framed perfectly by the NOW Pssc crowd. He’s the perfect foil — white male, conservative, successful, which have become trigger words for those indoctrinated in hate. Not only have we taken the bait, we’ve given them ample fodder to play against. This is a major victory for the Vermont NOW Pssc crowd. We need to know our terrain. We need to know the landscape in which we operate. We need change. I’m not a fan of having to wear nothing but brown shirts.

We had better start framing the conversations — framing the questions and framing the debate — or we will lose to the propagandists. If we don’t get control of our message, we’ll face a massive loss, just like Custer’s Last Stand. We don’t need more carnage, we need a new spirit, one that brings us love, joy and peace. We need to know the landscape and how we can avoid the triggers.

We need to frame this election for the people of Vermont. It could be the most fun, prosperous election cycle Vermont has ever witnessed — a welcome change for sure. Vermonters need to control the conversation.

Neil Johnson, of Waitsfield, is state chair of the Green Mountain Party and was a 2018 candidate for state House in the Washington 7 district.

5 thoughts on “Neil Johnson: On framing Romney, Billado, Sanders and the election”