Opponents of Republican New Hampshire Gov. Chris Sununu in past years have run up against the fact that he has remained popular in the state even as the fortunes of his party have waxed and waned. Even as Granite Staters turned over control of the Legislature to Democrats in 2018, they reelected him for a second term.

Sununu frequently scores highly in rankings of governors. For instance, the Cato Institute on Monday named Sununu as the highest-scoring governor in its 2020 fiscal policy report card. 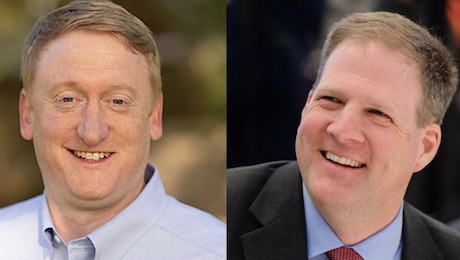 “Throughout his tenure, Sununu has resisted pressure to increase taxes and spending, and he has defended New Hampshire’s status as a low‐​tax state with no individual income tax,” the report said.

Sununu, who has held the office since 2017, had a landslide victory in the Sept. 8 primary election, with 130,515 votes while Karen Testerman received 13,539 and Nobody, a candidate who legally changed his name from Rich Paul, received 1,232 votes.

Feltes, who has served as Senate majority leader since 2018, beat Andru Volinsky in a 72,240 to 65,382 vote in the state’s primary election Sept. 8. He and Volinsky aligned on several issues, and both strove to be known as “progressive,” the Concord Monitor reported in an article about Feltes’ declaration of victory in the primary.

“Today I announced that as governor, I will reject and return the pay raises @ChrisSununu took until we raise the minimum wage in NH,” Feltes tweeted Oct. 5. “Like [President Donald] Trump, Sununu opposes raising the minimum wage and even called it ‘dumb’ and ‘disastrous’. Our working families deserve better.”

Sununu wrote in a July memo after his veto, “Now is exactly the wrong time to pursue policies that will reduce the chances of Granite Staters being able to get back to work and that will further hinder our employers who are already struggling in this global pandemic. This bill would have meant fewer jobs and fewer available hours for our workers who are unemployed or underemployed.”

Perry has declared a platform of “criminal justice reform, lower taxation, ballot access reform and voting rights,” vowing to support “any efforts” to reduce taxes and veto any increases in taxes or new taxes. He ran as a Libertarian in the 2016 presidential election.

New Hampshire Public Radio will host a debate between Sununu and Feltes from 9 to 10 a.m. Oct. 20 live on The Exchange on NHPR and NHPR’s Facebook Live channel. The debates will later be broadcast on NHPBS and NHPBS Explore.