For the past 10 months, negative news has swirled around us. The bitterness during the election campaigning, the street protests on both coasts, and the anxiety from COVID-19 are all overwhelming. It is time for some good news for a change.

Last month, out of the determination of Jim White, Ken Nicholson, and this writer, the Vermont Department of Parks Forests and Recreation installed a permanent sign at the entrance to the Fisher-Scott Memorial Pines site in Arlington, Vermont. In the past, no signage noted the existence of this State Natural Area on Red Mountain Road at the northern end of Arlington’s Route 7A. 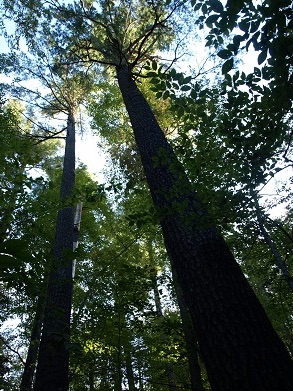 White pines in the Fisher-Scott Memorial Pines site in Arlington reach heights of 120 feet and diameters of 40 inches, and are the largest pines in Vermont.

The significance of the 10-acre park is in two parts: first, there are scores of white pine trees that reach heights of over 150 feet. These enormous trees — so tall and magnificent that when you try to get a glimpse of their tops, you fall backward — are close to 250 to 300 years old.

Upon entering the park via a dirt path, one notices the absence of the giant trees. Several hundred years ago, the trees that were once growing closest to the entrance were removed to become the ship masts for King George III’s Royal Navy. Legend has it that it was a capital offense for cutting down a tree meant to be a mast for the king’s ships.

The park’s second and more profound purpose is its memorial to one of Vermont’s WWII heroes, Captain James Canfield Fisher, M.D. of the U.S Army’s Medical Corps. “Doc Jimmy,” as he was referred to by his fellow soldiers, was the son of another famous Arlingtonian, writer Dorothy Canfield Fisher.

Seventy-six years ago, on October 20, 1944, General Douglas MacArthur fulfilled his promise and returned to the Philippine Islands to liberate them from their Japanese Imperial Army captors. MacArthur’s forces hurried but had to contend with a horrible problem as they advanced — the enemy was killing Allied POWs.

In January of 1945, MacArthur ordered the Sixth Ranger Battalion to go 30 miles behind enemy lines and free Camp Cabanatuan’s 513 Allied prisoners, many of whom had been held captive since the beginning of the War. Dr. Fisher, aware that many of the POWs would be too weak to make it safely back to Allied lines, volunteered for the perilous mission.

Doc Jimmy had been correct: the prisoners were weak and sick. Thankfully, all were safely rescued. One of the last to leave the captured camp was Doc Jimmy, and, as Providence would have it, he was struck by a mortar shell. He was carried, strapped to a door — the only stretcher that could be located — to a makeshift first aid station. He died two days later.

What Doctor Fisher, who went to school in Arlington and later Harvard Medical College, experienced in 1945 is best expressed by author Hampton Sides’ 2002 book “Ghost Soldiers,” which was made into the major motion picture The Great Raid by director John Dahl in 2006.

In 1975, family descendants of the late Dorothy Canfield Fisher donated the pine forest, along with a memorial plaque that honors not only Captain Fisher but also the doctor’s mother, father, and their grandson, John Paul Scott, to the State of Vermont.

Ever since the donation some 45 years ago, no official designation (signage) for the site’s location existed until now. The park’s beauty is so special that the federal government declared it a National Natural Area.

From the entrance, it is a short walk to the Fisher Memorial Plaque, but on the way, one is humbled by the majesty of the trees that stand as sentinels, watching over Doc Jimmy’s memorial of selflessness.

One thought on “Keelan: Time for a change of pace — some good news”