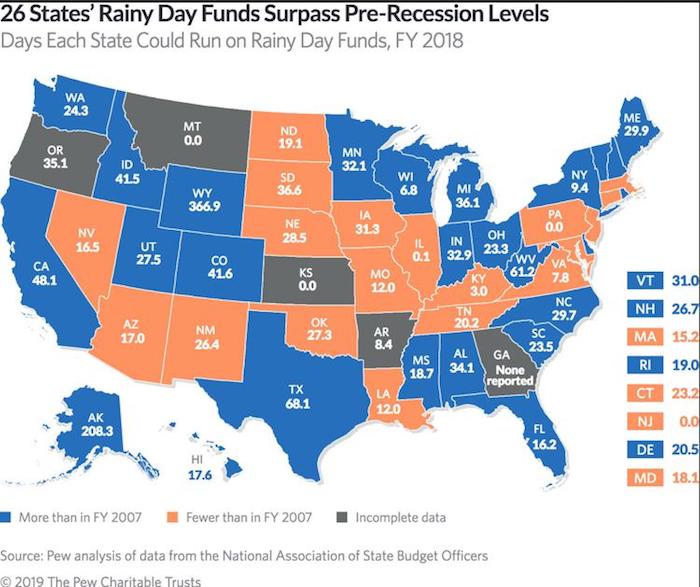 The end of fiscal-year 2018 saw states socking away a record amount in rainy-day funds — nearly $60 billion — with Colorado and Michigan reporting some of the heftiest reserve accounts, according to a new Pew Charitable Trusts study.

Wyoming had the largest rainy-day fund as a percentage of total spending: $1.5 billion, or enough to fund state operations for 366.9 days. Colorado and Michigan also made the top 10 in the Pew study, with Colorado’s fund providing enough to run the state for 41.6 day and Michigan posting 36.1 days of operating reserves.

At the other end of the ranking were states like Illinois, which had $10 million in its rainy-day fund, enough to fund government operations for only one-tenth of one day. Kansas, Montana and New Jersey reported zero dollars in their rainy-day funds.

“States had more savings set aside at the end of fiscal 2018 than at any time since the last recession,” Justin Theal, a Pew state fiscal researcher, told Watchdog.org. “… But it’s important to note that this is in dollar terms, not as a share of government spending.”

The 2017 federal income tax reform was one of the factors that helped to boost states’ tax revenues last year, along with a robust economy, rising stock prices and state policy decisions, according to researchers.

“That’s one of the things we point out as part of the cause of this tax revenue surge in fiscal 2018, which helped 32 states add $10 billion to their rainy-day funds,” Theal said.

But Barb Rosewicz, another Pew state fiscal researcher, said the effects of the 2017 income tax reform would likely be temporary.

“We did notice widely that there was a surge in 2018, but there are so many different influences right now that I can’t really tell exactly what it is,” Rosewicz said.

How much states put away for future economic downturns or natural disasters depends on the structure of their economies and tax systems, according to Pew researchers.

“Wyoming, for example, and other energy-intensive states like Alaska, tend to have added to rainy-day funds such that they’re in the top 10 of our rankings,” Teal said. States that depend heavily on revenues tied to the oil or coal industries have more volatile revenue shifts over time, he added.

States such as California, which depend on income taxes for a large share of revenues, also need larger reserve funds to weather economic downturns, researchers said.

But even with the increase in money going into rainy-day funds, the size of those funds is no guarantee that they can all weather a future recession without major cuts or tax increases, they said, since fiscal environments among states differ so much.

And some states run up against statutory limits that restrict the size of rainy-day funds. Ohio’s fund ranked just above the overall national median at the end of fiscal-year 2018, with its $2 billion reserve account — which amounts to 6.4 percent of spending, or enough to keep the state operating for 23.3 days. But the reserve fund by law can have a maximum of 8.5 percent of the general-fund revenues, according to Andrew Kidd, an economist with the Buckeye Institute.

“We’re actually close to reaching that cap,” Kidd told Watchdog.org. “… Unless a statutory change takes place, we can’t add (much) to the rainy-day fund.”

In a recent report, the Buckeye Institute suggested returning surplus funds to state residents through permanent tax reductions. Such an action would lead to the creation of 2,100 new jobs annually in Ohio, the institute’s Economic Research Center reported.

And the institute has urged state lawmakers to keep government spending in line with population growth and inflation so that the state does not spend beyond its means.

“It’s one of those things where we want policymakers to be making the same kind of choices that families make,” he said.

Toward the other end of the Pew ranking is Pennsylvania, which had just enough in its rainy-day fund to run the state for a tenth of a day.

“Pennsylvania made its first rainy-day deposit since fiscal 2009 after the close of fiscal 2018,” the Pew study says, “but the $22 million contribution will not be enough to significantly increase its ranking for fiscal 2019.”

Michael Torres, spokesman for the Commonwealth Foundation in Harrisburg, said the state’s lack of a sufficient reserve fund would affect its ability to ride out a future economic downturn.

“However, the lack of a rainy-day fund is merely a symptom of a greater problem,” Torres told Watchdog.org in an email.

The Pennsylvania Independent Fiscal Office predicted that the state would post a $1.6 billion deficit next year, even as Pennsylvania is pulling in higher-than-expected revenues due to favorable economic conditions, he said.

“The reason for this huge deficit is an addiction to overspending,” Torres said. “Since 1970, the commonwealth’s total operating budget, which includes the general fund and shadow budget, has more than tripled (adjusted for inflation).”

To get the state to spend within its means, the foundation favors reforms in the form of the Taxpayer Protection Act, which would limit state government growth to account for population growth and inflation only.

“It also mandates that any surplus goes into the rainy-day fund,” he said.