MONTPELIER — Dozens of protesters wearing yellow vests showed up at the Statehouse on day-one of the 2019 legislative session to tell lawmakers that a carbon tax should not be on the agenda.

A snowy Wednesday morning forced about 50 participants indoors, where the No Carbon Tax Vermont rally continued. Protesters wore the vests in imitation of the demonstrators of riots that broke out last month across Europe in response to carbon taxes proposed in France and other countries. 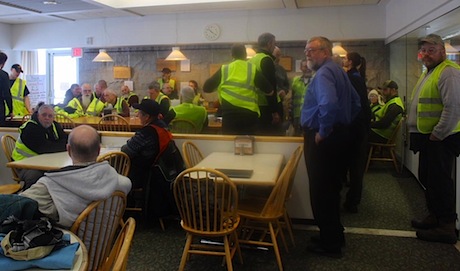 Bad weather forced protesters to take their signs and speeches inside, where the demonstration continued.

In the Green Mountain State, the most recent attempt at a carbon tax was last year’s ESSEX plan, which would have forced fuel distributors to pay a 32-cent excise tax per gallon for gasoline, as well as 40 cents more for diesel and heating oil, and 24 cents more for propane and natural gas. It failed to gain traction, even among the liberal majorities in the Vermont Legislature.

It’s widely expected that with new supermajorities at the Statehouse (more than two-thirds in both chambers this year), Democrat and Progressive lawmakers will again attempt to pass a carbon tax.

Several speakers gave presentations throughout the morning, including familiar faces such as Ethan Allen Institute President Rob Roper, as well as some new voices.

J.T. Dodge, of Newbury, helped coordinate the event. He emphasized that any time the price of energy goes up, it affects costs for nearly every other aspect of the economy.

Roper, who spoke next, noted that the new legislature is heavily influenced by green energy insiders who stand to gain financially from a carbon tax.

“SunCommon, which is the for-profit VPIRG spinoff that makes money putting solar panels on people’s homes, they have two employees who are now representatives in the House, plus the wife of the president of that company,” he said. “Think about that — SunCommon and VPIRG now have more representation in the House of Representatives in Vermont than any district in the state.”

Guy Page, a resident of Berlin, shared some of his past personal struggles with heating his home. He said a new tax on heating fuel could be devastating.

He said it was upsetting to think that the state of Vermont “on purpose would make it harder for people to fill those tanks and get to work.”

Burlington resident Skyler Bailey started his speech by asserting that while he believes in man-made climate change, he does not support a carbon tax. He said the oft-repeated claim that carbon taxes reduce carbon output is false.

“The authors of the ESSEX plan, despite their lofty claims, provided not one shred of cited information about whether their proposal could be expected to decrease greenhouse gas emissions at all,” he said.

He added that some societies that have carbon taxes now have greater carbon output. As an example, he argued that Germany, which carbon tax proponents say reduced emissions 7.5 percent after taxing carbon, had already seen a 21.2 percent decrease in carbon output 10 years prior to adopting the tax.

Fairfax resident Bob Shea also spoke, and said he no longer trusts that Vermont’s Republican governor is opposed to a carbon tax.

“Let there be no doubt that Phil Scott supports the carbon tax, as evidenced by the fact that he appointed carbon champions and global warming fanatics to his carbon tax study committee,” Shea said. “Now Mr. Scott asserts that he will not support a carbon tax, but he knows that its supporters have a veto-proof majority. There’s nothing like having it both ways.”

Other notable speakers included Casey Cota, who runs Cota & Cota, a Vermont fuel company. He said the tax is unnecessary because home heating oil usage has dropped from 170 million gallons to around 70 million gallons since 1970, even without a tax.