Noting that Vermont’s congressional delegation wants to amend federal law to drop from 100 to 25 miles the border zone in which Border Patrol and Customs officers may make traffic stops, Scott said, “I would like to tighten that up a bit, 100 miles seems excessive.” 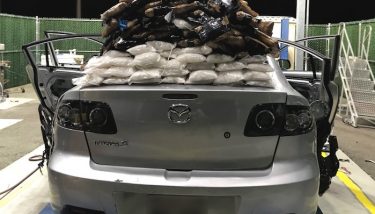 In August, U.S. Border Patrol agents in California arrested a man who had 114 packages of methamphetamine hidden inside his vehicle. Members of Vermont’s congressional delegation seek to reduce the border area that may be patrolled to just 25 miles.

Asked to be more specific about the ideal size of the border zone from Canada or the Atlantic Ocean, Gov. Scott replied, “somewhere between 0 and 100 miles.” He also said he was stopped — during the Obama administration — by Border Patrol on the interstate near Hartford (White River Junction). “They asked if I was an American citizen, I said yes,” and the officers waved him on.

Virtually everywhere in Vermont, except a tiny southwestern section, is within 100 miles of Canada or the Atlantic coast. The U.S. Border Patrol website explains both the purpose and legality of the 100-mile zone:

To [secure the border], they use a layered approach that includes patrolling the border itself, (including the use of electronic surveillance devices), patrolling nearby areas and neighborhoods where illegal immigrants can quickly fade into the general population, and conducting checkpoints – both stationary and temporary. Federal law says immigration officers, without a warrant, may ‘within a reasonable distance from any external boundary of the United States…board and search for aliens in any vessel within the territorial waters of the United States and any railcar, aircraft, conveyance, or vehicle.’ Federal regulation “defines reasonable distance as 100 air miles from the border.

100 miles is 75 miles too intrusive for Sen. Patrick Leahy and Rep. Peter Welch, both of whom introduced bills in July to reduce the limit to 25 miles. “We must strike a better balance between protecting our national security and preserving our constitutional rights,” Welch said. “A 100-mile unfettered enforcement zone is overly broad and unduly restricts the constitutional rights to privacy and protection against warrantless searches of millions of Americans living in this zone.”

Leahy said: “‘Show me your papers’ are words that you should never hear once inside the United States.”