Princetonreview.com has ranked the University of Vermont as the No. 1 school of pot in the nation.

In its annual, book-length study published this month, Princeton Review said it asked 140,000 students at 385 selected American colleges and universities 80 questions, including “How widely is marijuana used at your school?” UVM ranked first, with Pitzer College in California, University of Rhode Island, and Wesleyan University in Connecticut. 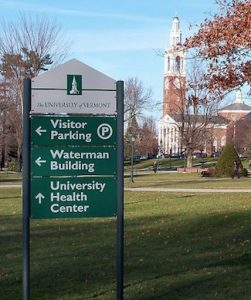 The three least-likely-to-inhale colleges are the U.S. Air Force, Army and Navy service academies, followed by four religion-based schools: the College of the Ozarks in Missouri, Thomas Aquinas College in California, Brigham Young University in Utah, and Wheaton College in Illinois.

Meanwhile in the nexus of Vermont, marijuana, and education: nurses can earn continuing education units study a ‘health care uses of cannabis’ curriculum promoted by RadicalHealth.com while attending an August 23-25 weekend retreat in Stowe. The event was published on the Heady Vermont marijuana advocacy website, which has recently announced it will begin a regional print publication.