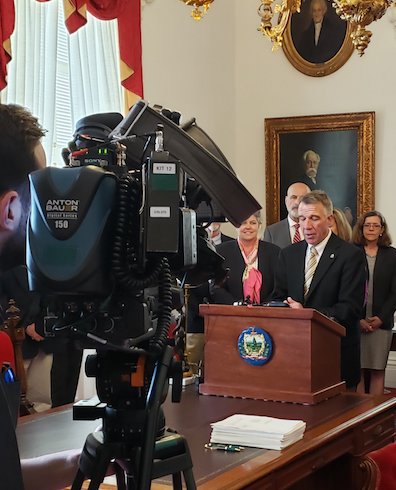 Gov. Phil Scott said he signed the 2019-20 $6.1 billion state budget because it meets major priorities while limiting spending increases to the same as wage growth in Vermont.

Gov. Scott also announced Monday, June 17 he had vetoed S.37, the medical monitoring bill. This bill would have required toxic chemical users and manufacturers to pay for the medical monitoring costs of people who claim they have been exposed to toxic substances, and can get an “expert witness” to convince a jury of the exposure and its potential harm.

“As a state, we have shown a significant commitment to ensuring Vermonters have clean and safe water and have existing legal avenues to pursue bad actors who jeopardize Vermonters’ health – and we will continue to do so,” Gov. Scott said. ““While we made progress this year in the discussion about medical monitoring, S.37 as passed, lacks the clarity needed by Vermont employers who our state relies on to provide good jobs. Numerous Vermont employers have expressed concerns to me, and to Legislators, that the unknown legal and financial risks, and increased liability, is problematic for continued investment in Vermont.”

Previously, Gov. Scott has signed into law the following legislation: