Faced with strong opposition from sportsmen’s organizations and an Addison County newspaper, Gov. Phil Scott and the Vermont Legislature are looking for a way to keep the Salisbury Fish Hatchery open.

The southern Addison County facility is one of five hatcheries that stock Vermont waters with species popular with fishermen. The state budget is tight this year, fishing and hunting revenues are down, and closing Salisbury will cut $250,000 in state spending. On the plus side, financially, Fish & Wildlife fish hatchery operations stock the state’s waters with fish that support a $31 fishing industry, according to a Feb. 14 editorial by Addison Independent publisher Angelo Lynn.   The free-to-the-general public fish hatcheries are also popular field trip destinations for families and schools. 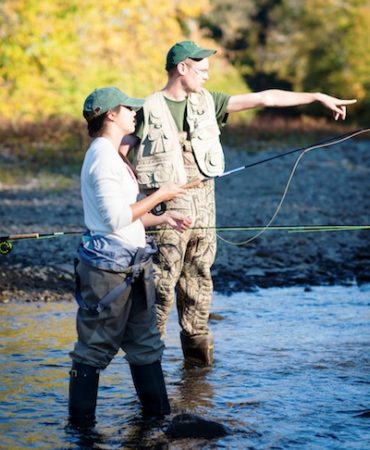 Fishing is a $31 million business in Vermont. Sportsmen’s groups are trying to reverse the planned closure of a fish hatchery in Salisbury in Addison County, and they’re getting help from at least one local newspaper.

Since the planned closure was announced earlier this month, Gov. Scott and administration officials have been listening to concerns from the Vermont Federation of Sportsmen’s Clubs and other hunting and fishing organizations. “The administration and Fish & Wildlife are engaged in conversations about what that would look like. We heard their concerns, we understood what they are saying,” Fish & Wildlife Commissioner Louis Porter told Headliners Friday afternoon.

A key legislator said “we’re looking into the impacts” of closing vs. operating the hatchery. “We’re trying to buy ourselves another year to stay open,” the lawmaker said today. One environmental impact is phosphorus effluent runoff into Halmon Brook.  A mitigation plan will likely need to be part of the solution if the hatchery is to remain open.

Publisher Lynn of the Addison Independent argues for a balanced, pragmatic solution, especially in light of far more severe runoff problems elsewhere: “Let’s be real: Should the Agency of Natural Resources be a stickler over this tiny bit of effluent from a single hatchery when it consistently turns a blind eye to the millions of gallons of wastewater dumped into Lake Champlain annually by sewage treatment plants throughout the Champlain basin?” The strongly-worded editorial concludes with contact information for administration officials and both Addison County senators.

The “Addie Indie” also notes that Salisbury is the only ‘broodstock’ station, mating male and female fish and producing five million trout eggs every year.  Closing Salisbury would just require the State to develop broodstock facilities at one of the other stations.

No often do Vermont’s hunting and fishing activists find common cause with a newspaper reputed to be one of the most politically liberal in Vermont.  But it’s happening over the Salisbury Fish Hatchery. And state officials seem to be noticing.

Image courtesy of Vermont Department of Fish and Wildlife