After Gov. Phil Scott signed an executive order on Feb. 12 directing the Agency of Administration to guarantee that Internet service providers contracting with Vermont adhere to net neutrality, one expert is warning the approach will fail, and an industry lobby group is threatening to sue.

Brent Skorup, a senior fellow at the Mercatus Center at George Mason University, has been at the forefront of the debate on net neutrality. He says the issue has become mired in misconceptions about what net neutrality means for Internet freedom.

“[In] the net neutrality movement, people just turn off rational thinking when it comes to this issue,” Skorup told True North. “It’s a very politicized fight at this point. … It’s not clear what net neutrality means anymore.” 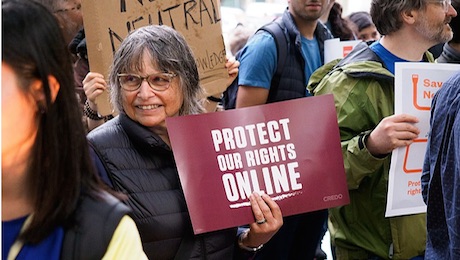 STATES RISK LAWSUITS: Vermont could face litigation if it continues getting into the business of Internet regulation, which is what Gov. Phil Scott committed to through an executive order earlier this year.

Since 1996, the law governing the Internet was that it be considered a title 1 service (requiring light-touch regulation), whereas under the Obama administration in 2015 it became a title 2 classification (requiring strong regulation).

Skorup said that according to the Federal Communication Commission’s December 2017 Restoring Internet Freedom Order, states are prohibited from taking individual action to regulate Internet services. He referenced section 230 of the 1996 Telecom Act, which states as national policy that the Internet should be free from any federal or state interference.

“That’s still the law,” he said. “You wouldn’t know it based on what the FCC did a few years ago, but that’s still the current law and national policy that the Internet and its services should be unfettered from federal and state regulation.”

States that go rogue and enact their own net neutrality laws could open themselves to ligation. Accord to one blog post by the lobby group USTelecom ( “All Americans Deserve Equal Rights Online“), it’s guaranteed.

“Broadband providers have worked hard over the past 20 years to deploy ever more sophisticated, faster and higher-capacity networks, and uphold net neutrality protections for all,” USTelecom CEO Jonathan Spalter wrote. “To continue this important work, there is no question we will aggressively challenge state or municipal attempts to fracture the federal regulatory structure that made all this progress possible.”

Spalter further makes the case that the U.S. Constitution grants the federal government “jurisdiction over commerce that moves across state lines,” which is why a “splinternet,” as Skorup dubbed the state-by-state efforts, may not withstand a legal challenge.

This is not the first time USTelecom has taken on this cause. It sued the FCC to get the rules overturned when the commission implemented net neutrality.

A spokeswoman for USTelecom told True North there won’t be litigation against Vermont or other states until the application of these state net neutrality policies take effect and start to impact Internet policy. After that, Vermont could expect litigation.

A common concern among net neutrality proponents is that ISP monopolies could form and muscle out competition and raise prices. Scorup dismissed those worries, saying the nation already has competition laws on the books, and that net neutrality never dealt with competitive practices anyway.

“These net neutrality rules don’t get at competition problems, which is clear for those who have read the 2015 order,” he said. “This was mostly about expanding the FCC’s jurisdiction to the Internet, which until 2015 they didn’t have much regulatory power over the Internet.”

Another concern by many is that ISPs will selectively throttle content.

“People often trot out that ISPs will block Netflix — it’s never happened,” he said. “Or [they worry] that they’ll block a website because they don’t like the political content. It’s never happened.”

Meanwhile, social media websites have been under political fire for allegedly skewing content. Skorup doesn’t dispute that this goes on, but he doesn’t suspect foul play.

“The rules did not intend to go after non-Internet service providers like Facebook, Google and Twitter, and these companies do all kinds of filtering of content and editing of content, and most of this is pretty unobjectionable. Most people don’t want pornography or violent videos on their Twitter feeds,” he said.

The USTelecom blog post calls for regulating websites. “Protections should be no different for consumers in Minnesota or Iowa than they are in California or Florida. Equally true, consumers deserve consistent safeguards across the online world, whether engaging with Facebook, Google, AT&T or Comcast.”

Skorup said these state net neutrality efforts are happening in more than half of the 50 states, some through executive order and some through legislation. He doesn’t see a bright future for these endeavors.

“I don’t see these laws succeeding because the FCC, through pretty wide latitude, can preempt states, especially for an interstate service like the Internet,” he said. “But crazier things have happened.”

Todd Schurz, president of Schurz Communications, which won a bid to purchase the financially  beleaguered Burlington Telecom, reiterated that whatever happens in Vermont, the company will honor their agreement with the city of Burlington to follow net neutrality standards.

“I was aware that the state was looking at different things,” he said. “I know we put in writing what we would do, and we will certainly honor that and respect that. We’re probably fine with what the state is proposing.”

He added that Schurz Communications would support a federal net neutrality solution that would not change from the regulatory level as different presidents come in and out of the White House and change the composition of the FCC board.