Editor’s note: This commentary is by Stan Greer, newsletter editor for the National Right to Work Committee.

Over the past few months, top bosses of the mammoth National Education Association (NEA) and American Federation of Teachers (AFT/AFL-CIO) unions have been the ringleaders of a campaign to keep K-12 public schools across the country shuttered unless and until their demands are met.

Early last spring, the overwhelming majority of U.S. schools were “temporarily” shut down as part of what was sold as a “15 day” program to slow the spread of COVID-19. With few exceptions, schools remained closed and offered on-line education only for the rest of the academic year. But by early June America’s K-12 parents were, according to a scientific survey conducted by Gallup, overwhelmingly ready to have their children return to attending school, at least part-time, come August and September. Ample and mounting scientific research supports the stance of parents who believe their public schools already have more than sufficient resources to offer in-person instruction safely this fall. 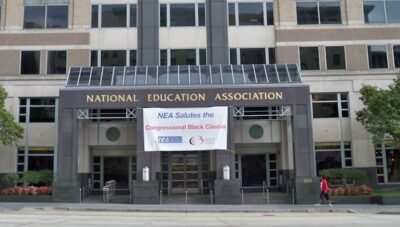 In spite of parents’ preferences and the medical evidence, with just a couple of weeks to go until Thanksgiving, nearly half of the nation’s 50 largest school districts still hadn’t reopened, and a number of school districts, including Los Angeles and San Francisco, had no firm plans to reopen at all.

The key reason why many if not most public schoolchildren across America still aren’t learning in a classroom, long after schools in the United Kingdom and throughout continental Europe and much of the rest of the world reopened, is that more than 30 state monopoly-bargaining laws grant a handful of teacher union bosses effective veto power over how the vast majority of K-12 schools nationwide are managed. The extended shutdowns of schools throughout Big Labor-stronghold states like California, Illinois, and New York have provided political cover for union-friendly big city politicians in Right to Work states like Virginia and Texas to do the same in their districts.

What are NEA and AFT union bigwigs demanding as a condition of their standing down and allowing the thousands of schools that remain closed to reopen? Even though the U.S. already spends nearly 40% more per pupil than the average for Organization for Economic Cooperation and Development member countries, according to the nonpartisan National Center for Education Statistics, the teacher union hierarchy insists much more money be spent. A joint statement by the AFT brass claims schools need “at least” another $116.5 billion to reopen. This is money that would almost certainly have to come from federal taxpayers. Unless Big Labor-dominated school bureaucracies get the loot, according to AFT President Randi Weingarten, “they won’t reopen, period.”

If, as many political observers expect, the U.S. Senate remains under current Majority Leader Mitch McConnell’s (R-Ky.) control after two Georgia run-off elections set for January 5, and current Big Labor Minority Leader Charles Schumer (D-N.Y.) does not take over operational control of the control of the chamber at that time, Weingarten and company may finally have to give up on their attempted shakedown of American taxpayers.

But top teacher union officials who have inflicted substantial harm on millions of American schoolchildren that “could last a lifetime” are still set to get a big reward from a Biden presidential administration for their strenuous efforts to keep schools locked down.

According to a November 9 report by Education Week’s Andrew Ujifusa on Joe Biden’s plans for America’s schools and universities if the former vice president prevails in the ongoing fight over vote counts in the just-concluded 2020 presidential election, a “lot of speculation has focused on Biden nominating” Weingarten or her partner in perpetuating school closures, just-retired NEA President Lily Eskelsen Garcia, to be his education secretary. Even if Biden’s choice isn’t an actual union boss, the AFT and NEA hierarchies “undoubtedly will influence Biden’s pick,” added Ujifusa.

That Biden may well reward one of these two shakedown artists with a cabinet position is appalling, but it shouldn’t be surprising. After all, this is the candidate who made federalizing the state government-sector monopoly-bargaining privileges Weingarten, Eskelsen Garcia, and their lieutenants are egregiously abusing a principal plank in his labor-policy platform.

2 thoughts on “Stan Greer: Will a shakedown artist be rewarded with a cabinet post?”