This May, Harvard University’s Center for Education Policy Research published the most comprehensive study yet on the impact of the prolonged complete and partial lockdowns of K-12 public schools across much of America that began in March 2020 and continued, in many cases, until the end of the 2020-21 academic year,

After analyzing data “from 2.1 million students in 10,000 schools in 49 states,” the team of Harvard researchers concluded that politically-induced remote learning during the COVID-19 pandemic, and not the pandemic itself, was the primary cause for large losses of student achievement over the past two years. 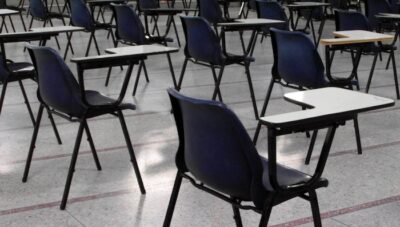 Increasingly lax disciplinary policies are another way in which education is being sabotaged in Big Labor-dominated school districts all over the country today. In the low-income district where he taught, acknowledges McCormick, absenteeism was a substantial problem even before the COVID lockdown era. But now the problem is far worse.

Other research shows that teacher union officials were by far the most powerful constituency lobbying against the return of full-time, in-person learning during the 2020-21 academic year, and that schools in jurisdictions where union officials wield extensive monopoly power to codetermine with school districts how teachers are compensated and managed were far less likely to reopen that year than schools where union officials have relatively less clout.

When classrooms finally did reopen for in-person instruction, conscientious and talented educators like Frank McCormick, who until recently taught history at a public high school in Waukegan, Ill., were ready to go the extra mile to help their students catch up academically, if  they possibly could.

Unfortunately, the same union bosses who successfully campaigned to keep schools closed, month after month, despite overwhelming evidence they could reopen safely, are now colluding with likeminded school officials, many of whom owe their political careers to Big Labor’s money and manpower, to make it difficult if not impossible for good teachers to do their jobs.

In districts like the one located roughly 24 miles north of Chicago where McCormick taught for more than a decade, teachers are trained, he reports, to instruct their students “to view their world through a lens of race and conflict,” and to encourage them to see “almost all American institutions, including public schools,” as “inherently racist.”

McCormick plausibly argues that such instruction breeds cynicism and conflict among students of all races and ethnicities, and thus undermines their progress towards becoming educated adults.

Increasingly lax disciplinary policies are another way in which education is being sabotaged in Big Labor-dominated school districts all over the country today. In the low-income district where he taught, acknowledges McCormick, absenteeism was a substantial problem even before the COVID lockdown era. But now the problem is far worse for two key reasons.

First, by gratuitously denying students in-person instruction for such a long period, government schools sent a clear message that such instruction is not necessary. As McCormick puts it, “Schools have lost legitimacy and perceived authority among parents and students because of their actions over the last few years.”

The second reason, continues McCormick, is that schoolchildren know they face virtually no risk of being disciplined for bad behavior:  “The schools just stopped having any consequence for skipping class. From the student’s perspective it was kind of optional.”

Eliminating meaningful consequences for derelict students makes life very hard for educators who truly care about helping those in their charge prepare for life as adults, but it apparently does not trouble the lowest-common-denominator of school employees who are a core constituency of teacher union bosses.

That’s why the testimony of concerned educators like McCormick about the corruption of public schools under monopolistic unionism is so important: “The union and the powers that be in the school district are going to do everything they can to paint parents …  [and] people like me that challenge the status quo as crazy. … [T]hey’re lying to protect a system that works very well for them. … I say this as a public school teacher and a union member of 12 years.”

Restoring the legitimacy schools have lost over the course of decades, and especially since 2020, will be a long and difficult process. The elimination of laws authorizing Big Labor monopoly bargaining over how teachers are compensated and managed in Illinois and more than 30 other states is a critical part of the solution.