BURLINGTON, Vt. — A special city council election in Burlington’s Ward 7 has more than a few voters in an uproar.

The election, set for Tuesday, was planned in April after Democrat Councilor Tom Ayres announced he would be stepping down in June.

Since Ayres announced his departure, the race has rapidly morphed into a referendum on the North Avenue Pilot Project, an initiative to reduce one of the city’s main thoroughfares from four lanes to two, plus a center turn lane. The Public Works Department claims the change will “make North Avenue safer for vehicles, pedestrians and bicyclists.”

Many residents have reported increased traffic jams since the pilot began, especially during rush hours. Cyclists appear to like the change, however, despite having a designated, well-traveled bike path nearby.

But the pilot ends this month, and New North End residents living in Wards 4 and 7 have been surveyed twice about the new road configuration. The survey was later offered to all Burlington residents, to the chagrin of residents who live along North Avenue, and who will have to live with the results.

Karen Rowell, one of the residents opposed to the pilot, is rooting for Dober, who has spoken out strongly against the lane changes.

“If Dober wins, there will be, I believe, three votes against the North Avenue plan,” Rowell told True North. “That will look bad for the city to pass it, especially with three representatives being from the New North End.”

“If the city really wanted a true result of what the residents want on North Avenue, they would let us vote on it. But they don’t want to do that,” she added.

Rowell says the June 27 election has become a vote about the road because a majority of local residents don’t like the changes, and because the survey results seem biased in favor of bicycle advocates.

The Castleton Polling Institute sent a postcard survey in early May, but Rowell says not everyone received the mailing.

“They’re counting on us not bothering to respond, that’s how it was designed,” Rowell said, adding that poor advertising and computer glitches may have skewed the results.

A second postcard was mailed so that residents received it on June 2. However, that mailing had a June 4 response deadline.

“Since it was a weekend, the person who was supposed to receive calls generated from the postcard was not available,” Rowell said. “So there was no way to ask for a survey to be mailed to a resident (in time), and also no way to call and complete the survey – you could only do it online, and then you have to have your computer up to date to access it.” 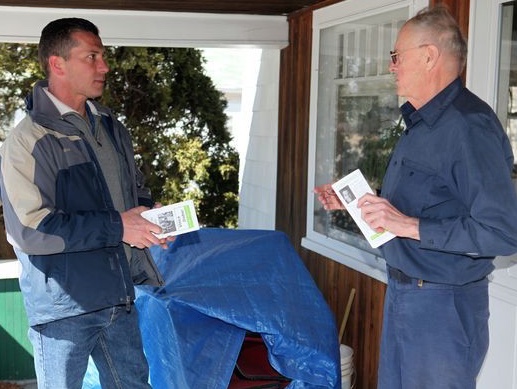 In an interview, Dober told True North Reports that a bike lane is not needed on North Avenue.

“We have a bike path already within a 1,000 feet of the avenue,” he said. “We’ve spent tens of millions of dollars on the bike trail. Now the pilot bike lanes have slowed down traffic big time and created more accidents. And as I am doing my sign waves during the campaign, cars are stopped and backed up. Even the emission effects of this traffic isn’t good.”

Like Rowell, the New North End Republican believes the lane changes are being forced on residents against their will.

“During the last election cycle, the city had this on the ballot, and Wards 4 and 7 voters said no, they don’t want it,” Dober said. “But the rest of the city said they wanted it even though they don’t live in the neighborhood.”

“I live in Ward 7 and I didn’t even get the second survey postcard. … Then Castleton’s computer server went down and many people couldn’t do the online survey,” he added.

Dober wants the City Council to put the whole shebang on the ballot for Town Meeting Day next March.

“Let the voters in Wards 4 and 7 really say what they want, because my true opinion is that the city is trying to fix something that isn’t a problem,” Dober said. “This is costing the taxpayers’ money and time.”

Rowell said she and other neighbors will be stewing over the process until it is resolved in favor of what the residents of Burlington’s New North End think best, not bureaucrats at City Hall or in Public Works.

“This is what we call an ‘illusion of choice,'” she said. “That is, having meetings where people are not listened to and sending out a second postcard so they can say they complied with the opposition’s request, knowing full well that the second mailing was never going to work.”

A June 22 community meeting had been planned to discuss the controversy, but it was postponed. No reschedule date was announced at press time.