A South Burlington city councilor says new zoning proposals designed to protect forested areas may not only prevent new affordable housing during a housing crisis, but also could cause longer commutes for the city’s already largely non-local workforce.

He continued that it’s the situation is only going to get worse before it gets better.

“We know from the studies by the Chittenden County Planning Commission that over the next three years the demand for housing is only going to increase as the demand for employment increases,” Cota said. 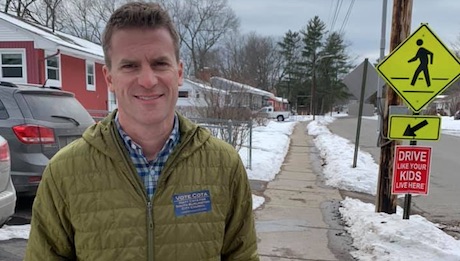 ZONING IN THE WAY: According to Matt Cota, a city councilor for South Burlington’s Southeast Quadrant, new proposals for zoning could exacerbate the current housing shortage.

The Southeast Quadrant is known for its rural setting and its wealth. Residents’ average income is around $150,000. These residents, Cota said, strongly value their woodlands, wetlands, and other natural surroundings — and that means they often don’t like to see new developments.

Cota said there was a strong sentiment two decades ago that this was the area of the city where new development should occur. But for the past three years, development has been in a kind of limbo called interim zoning. This meant that certain large developments had to go through the City Council while the city’s planning and zoning departments drafted up new rules that, Cota says, amount to “mainly more restrictions on development.”

Those three years came to end on Nov. 13.

Cota said already half the available land that’s been considered for development is already protected by existing zoning. What’s at stake is the other half, and the city already invested and built out its water and sewer lines into these areas in anticipation of future development. Also, there is natural gas infrastructure and power lines nearby.

“It’s these areas of land that could have further restrictions on development,” Cota said. “ … Now a developer could say that’s fine, I’ll just build fewer units and we’ll move on. Or they could say given the rise in construction costs, it’s easier to build in Hinesburg or Georgia or Fairfax.”

Cota noted that 87 percent of the people that work in South Burlington don’t live in South Burlington. That could mean that these zoning regulations, written with the intent of saving trees and mitigating carbon, could ultimately result in higher carbon emissions as people drive their cars more.

“When you have to drive 45 minutes away that’s less time with your family, less time in the community in which you live, more chance that you are going to miss you kids’ school play or their ballgame — and you are also increasing carbon emissions.”

Cota pointed to the irony that much of the argument for these environmental standards is to reduce emissions.

“If you are a nurse who works at UVM Medical Center and you have to move all the way up to Milton or the islands or Underhill — beautiful communities — but you are only increasing the amount of fossil fuels that you put in your car and the carbon that you put in the atmosphere because South Burlington has more restrictions on where you can develop.”

Cota explained how there are currently more jobs available than the number of people who are actively looking to find jobs, which is another reason that they need more affordable housing he added.

“We have a 2.9 percent unemployment rate; hose are people that need jobs, but we have a 7 percent underemployment rate, meaning there are jobs that are unfilled,” he said.

On the opposing end, South Burlington Natural Resources and Conservation Committee Chair Ray Gonda wrote a commentary earlier this year explaining why she does not want to see new development in that area.

“What areas that have previously been given protections adjacent to the project area would be overrun with people, by cats and dogs, by sheer proximity, and by intrusion of construction, and the destruction resulting from cutting of many canopy trees in those areas,” she wrote.