The latest media outburst against President Donald Trump was as classic an example of cultural misunderstanding as you are likely to find. You could sense it from the first headline. The president’s military perspective that a fallen soldier represents the finest kind of bravery — the capacity to selflessly go into danger knowing full well what the cost might be — was misread by the widow and also a Florida congresswoman as a callous and disrespectful statement about the fallen that “he knew what he was getting himself into.” 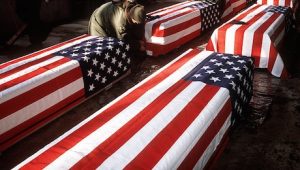 Years ago I read a book that detailed the growing cultural gap between the military and American civilians. There is much that is good about a volunteer military, but this is not one of them. Large segments of American youth, particularly the offspring of the elite, have no experience of military life or the values that motivate soldiers to give selfless service. Several decades ago, this misunderstanding between President Trump and the widow of fallen soldier Sgt. La David Johnson would simply not have been possible. Today it almost feels as if we are living in two countries. This is not the result of Trump’s election but more likely the reason for it.

The fact that such a misunderstanding could occur is disturbing enough, but that wasn’t all that happened last week. The willingness of so many to believe that any president would be so mean-spirited that he or she would deliberately be disrespectful to a fallen soldier’s widow is mindboggling. It requires a toxic level of hate in the human heart. Booker T. Washington certainly understood what it felt like to be aggrieved. Yet he was able to write this about his own spiritual discipline: “I shall allow no man to belittle my soul by making me hate him.”

Retired Gen. John Kelly’s Oct. 19 statement defending the president reflected Washington’s view in its content and tone. It touched me deeply. It was heartfelt and authentic, plus it gave me a sense of the military experience that only a veteran could do. This is the kind of leadership we need on both sides of the aisle, if we are to heal our country’s self-inflicted wounds.

Carol Frenier is a resident of Chelsea, Vermont.