MANCHESTER — At a community forum about race issues in Vermont, a panel of black and white social-justice activists approached the discussion with sensitivity as well as calls for action in towns, businesses and schools across the state.

“We’re not here to have you talked to. … We’d like this to be an open conversation about race no matter what your race is — speak your mind,” Fine said.

“Silence is not an option. … And we don’t want to question the veracity of anyone’s experience in relation to race,” he said.

Panelists shared their experiences — good and bad — as well as the challenges of being members of a minority in what some described as “lily white” Vermont. 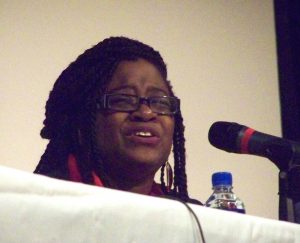 Rep. Kiah Morris, D-Bennington, said more black people were in prison in Bennington County than anywhere else in the state — a fact she attributed to racism.

“These are really complicated, difficult personal conversations to have,” Morris said. “They will shake you to your core, they will make you question things you thought you understood.”

“(But) it’s what’s needed for transformative work,” she added.

Morris championed H. 308 (Act 54) creating Vermont’s Racial Disparities in the Criminal and Juvenile Justice System Advisory Panel. The bill, which passed the House and Senate earlier this year, was signed into law by Republican Gov. Phil Scott in May. The panel’s first report is expected to be completed early in 2018.

“I was the first black woman elected to the Vermont Legislature in almost 30 years,” Morris said. “This is an important conversation because Bennington County is anecdotally considered to be the most racist county in the entire state. Our court system sends more (Bennington County) people of color to prison then any where else in the state.”

“I have a young black son and I have concerns about what this means for our future and for our students. … I want to say that not everything is all right on this beautiful campus or in this beautiful state,” she added.

Pohl-Moore said she considers herself as both a Vermonter and a professional black woman. “I consider myself a seventh generation Vermonter. … I was actually born on a military base in California when my mother was out there in the ’70s … but I grew up on my grandfather’s land here. He died in 2012 in the very house he was born in in 1914,” she said.

She added that she first connected with panelists Fine and Johnson through NAACP Rutland member Duane Carleton’s documentary film, “Divided by Diversity.” The film, released in 2016, explores racism experienced by five black New York City student athletes attending a Catholic high school in Rutland. The incident divided the community, and the film is a sore spot for some local residents.

“It’s a big deal because the events in the film actually took place in Rutland,” Pohl-Moore said. “Duane couldn’t get it shown in Rutland before now. … No one wanted to see the racism in this school as well as Burr and Burton, where some of the racism against these students took place. It’s how racism looks here in Vermont.”

Pohl-Moore painted a dim picture for celebrating black identity in the state.

“Vermonters of color do not want to be here,” she said. “Some of us stay but a lot of us leave. Education prompted that. … I had the typical high school experience but what was missing was any sort of reflection of my racial experience.”

In speaking about her experience, Pohl-Moore claimed her brother “was the victim of a horrible hate crime.” She added that a Rutland mall CVS store manager, suspecting her of shoplifting, followed her out of the story to ask what she had in her pockets after she had made a purchase.

“It was time for me to go, to find myself. Vermont was not my home. … Now I am (back) here doing education work,” she said.

Naomi Johnson: “I feel a responsibility to people like me, especially black girls who are going through the education system.”

Johnson, a 2012 graduate of Burr and Burton Academy, made a special trip to Manchester just to attend the discussion.

“I consider myself a Vermonter. I’ve been here since I was three years old,” she said. ” … I didn’t expect to be back in Manchester, but I’m here after four years of being in college because I feel a responsibility to people like me, especially black girls who are going through the education system in southern Vermont.

“I had a great experience growing up here, but I didn’t celebrate my blackness enough and I wasn’t encouraged to do that. I want to make sure black girls growing up here love themselves. … I want them to know that this is a space where they can thrive,” Johnson added.

Members of the audience asked questions and told stories about their own perceptions of race and racism in Vermont. Although the causes of racism were elusive in the discussion, ideas were offered about how to teach race at home and especially in local schools.

“We’re born in this skin, so it’s OK to talk about race as early as you can — we have to know about this.” Pohl-Moore said. “There are many ways to talk about race and tolerance … there are so many resources to help Vermonters, just call the Rutland-area NAACP and we can help.”

4 thoughts on “Social justice panelists discuss being black in Vermont”