By Jackson Elliot | The Daily Signal

The word “socialism” has left behind its past of breadlines and beatings and has come to mean something like “kindness” for some students at Georgetown University, The Daily Signal found in campus interviews.

Many millennials would agree with the positive feelings these university students have for socialism.

“Socialism means multiple people coming together for the benefit of the most instead of the benefit of those contributing the most,” sophomore Darby Bupp, 19, a government major from Piqua, Ohio, told The Daily Signal. 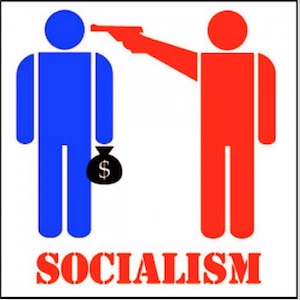 In over 40 nations that have practiced it, socialism inflicted loss of individual freedom, severe shortages of basic resources and consumer items, and untold suffering.

Stephanie Galvan, 21, a senior from Houston, Texas, had a similar perspective.

“[Socialism is] supposed to be restoration. If you have something, it’s OK to give out and help others,” Galvan, a neurobiology major, said.

The Merriam-Webster dictionary defines socialism as “any of various economic and political theories advocating collective or governmental ownership and administration of the means of production and distribution of goods.”

In over 40 nations that have practiced it, socialism inflicted loss of individual freedom, severe shortages of basic resources and consumer items, and untold suffering.

For students such as these, though, socialism means a better and fairer future, vaguely defined.

That 100 million people were starved, shot, and slaughtered by socialist governments from the 1917 Russian Revolution to the close of the 20th century is a fact that bears little relation to their “socialism.”

Although Harrison said he defines socialism as “more equity among people, less disparity,” he also said learning the dictionary definition is different doesn’t change his opinion of socialism “at all.”

Some millennials view deaths under communism as mistakes in the application of socialism, not the logical result of its premises.

“The implementation [of socialism] and the way it’s performed is not necessarily benefiting us,” Galvan said. “At its core foundation socialism is a great policy.”

A real socialist never would compel people to do something they disagree with, she said.

“At that point, it stops being actual socialism and starts being individualism and what a person [in power] wants.”

The YouGov survey found that only a little over half of millennials believe the Declaration of Independence “guarantees freedom and equality” more effectively than the Communist Manifesto.

Even if Americans don’t want socialism, it won’t matter for long, Galvan said. Socialism will benefit them enough that they won’t notice a difference, she said.

“There are always people who are unwilling,” Galvan said. “A lot of the people that are oppressed now are voting for socialism, and the ones who are unwilling are the ones [who are privileged,] so it’s OK for them to take one step down. And they wouldn’t even be taking a step down. I don’t see how it would even hurt them that much.”

The poll found that 1 in 5 millennials say society would be better off if all private property were abolished.

However, even if some millennials approve of some aspects of socialism, they disapprove of others, another Georgetown student told The Daily Signal.

“Those openings for corruption are almost guaranteed to cause things like genocide,” Jackson said.

Still, he said, “I don’t think that something being ineffective means that it’s morally wrong.”

Only one student interviewed by The Daily Signal expressed strong opposition to socialism.

“Many millennials want the government to give them everything, and each passing day [they] become more dependent on other people than just on themselves,” he said.

But Jackson, the math major, said he sees it differently.

“We can take some inspiration from socialism and try to implement those ideas into what we’re doing and see if we can find a happy medium that is actually effective,” Jackson said.

Doing so will help eliminate political corruption, he said.

“Even though I believe capitalism is the best economic system in terms of effectiveness so far, it also leaves open a lot of corruption possibilities,” Jackson said.

“I don’t think that necessarily means socialism, but the way socialism is advertised, it does imply a lot of fairness.”

9 thoughts on “Socialism all about inclusivity and kindness, students say”