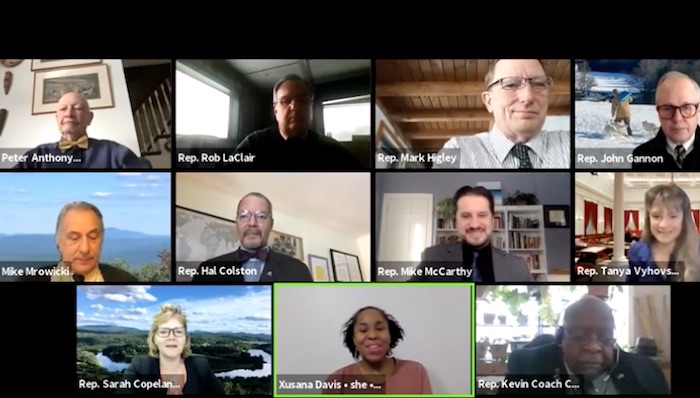 On Thursday, lawmakers from the House Government Operations Committee heard social justice advocates testify on a bill to add two full-time employees for the task of weeding out systemic racism in state government.

Xusana Davis, state’s executive director of racial equity, wasted no time making her case that there is an abundance of systemic racism in Vermont.

The bill, H.196, calls for the state to hire a policy and research analyst as well as an outreach and education coordinator. The positions would “support the work of the Executive Director of Racial Equity to mitigate systemic racism in all branches of State government.” The bill also seeks appropriate funding for the positions.

Davis said having some extra help could broaden the scope of her work.

“Having additional staff means that we can be in more places, provide that real-time guidance to folks, attend all of the community meetings, [and more]” she said.

Davis also suggested Vermont’s youth could be targeted to receive racial justice messages:  “[We want] to reach effectively people in systems at all grade levels, all professions, and all sectors, and to make sure that we are delivering a consistent message across the state.”

The issue of social justice training mandates has been controversial on the national scene. In October, the Trump administration moved to suspend all similar training for U.S. Justice Department staff. The Biden administration reinstated the training in January.

In addition to Davis, the co-founder and executive director of Justice For All Vermont, Mark Hughes, spoke to the committee. Hughes said the current level of racism in the state is a public health issue.

“If we’re going to throw money at this thing, if we are really serious, if racism is a public health emergency, and if we are really seeking moral budget, then what we should be doing is placing our full commitment to getting this done,” he said.

Hughes said the bill also provides authority for for the director.

“[H.196] proposes to provide the director with the responsibility, because this bill is not just about capacity, it’s also about authority, it’s also about empowering the office,” Hughes said, noting that the bill compels all state agencies to comply with the racial equity director’s program.

According to Hughes, data collection would be a key task for the racial equity team, including “collection of racially disaggregated data across all state government systems, including but not limited to housing, education, employment, housing services access, economic development and the so-called justice system.”

He added that data collection on social justice matters is already ongoing in society.

“What we’re really talking about is some kind of deployment and implementation of a technology infrastructure that is a centralized, and it’s actually just a point of aggregation, because, believe me, almost every one of these systems that are currently deployed are already collecting some type of racially disaggregated data, or have the ability to be configured to do so.”

In response, Rep. Peter Anthony, D-Barre City, noted that this data collection could be overwhelming.

“This is an incredibly daunting assignment or list of duties that is slowly aggregating,” he said. “ … I worry that the executive director would be spending all her time reprimanding various agencies for failing to do one thing or another and not get to the more important policy work, which is identifying systematic problems that should be called out.”

Hughes said the committee could expect to see more legislation backed by Justice For All Vermont, including a bill on reparations and more.

“Cultural and economic empowerment, home and land ownership, data and racial equity — which is what we are talking about right now — so-called public safety and even … the cannabis policy is coming back for racial equity,” he said.