During every contested election, campaign signs are trashed, removed and stolen. This year is no exception. Vermont Daily Chronicle is hearing reports from all over Vermont about the removal or destruction of campaign signs. 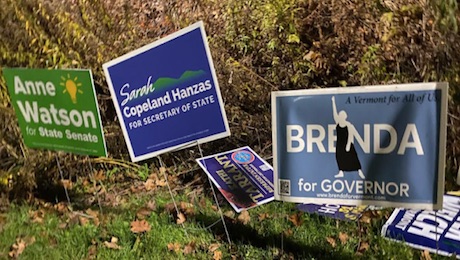 “My yard signs; dislodged, defaced and/or stolen at the Waterbury roundabout last night,” Republican House candidate for Waterbury Kathi Tarrant sent VDC in an email this morning, with the photo attached. “I will be filing a police report shortly.”

“A friend owns a small business in downtown Waterbury and witnessed someone move my sign way back off of Main St.,” The culprit is a minor town official who, she says, “came to my door on Halloween eve, madder than a hornet, and was banging in a threatening manner. I am starting to feel unsafe in my current environs.”

“Many friends/acquaintances/supporters refuse to display my signs for fear of retribution,” Tarrant said. Republican party officials have contacted the state police, she said – noting that “the state police are stretched pretty thin, by design.”

Like newspaper articles, letters-to-the-editor, Facebook posts, Tweets, campaign signs are media. They are a platform for the candidate to send a message to the voter. Unlike those other media, they are not free. Each costs several bucks (exact amount depends on size, material, volume, etc.), plus the wicket and the time taken to stick them into the ground. Many candidates dip into their own (meager) funds to pay for them. Tarrant paid $716.24, she confirmed.

Sign-trashing is, as the advocacy PR writers like to say, “a non-partisan initiative.” Progressives may have little in common with MAGA candidates but on this fact they agree: someone’s taking their signs, and they wish it would stop.

Speaking with Kathi Tarrant and reading her campaign literature, anyone with an open mind would conclude that here is a person of moderate means who is running because in her heart she believes life in the State of Vermont would be better if she, and others like her, sat in the wooden swivel chairs of the Vermont State House. Progressives and Democrats think likewise about their own candidacies.

Kathi Tarrant has fire in the belly for making positive change in Vermont. What’s ironic is so does Brenda Siegel, the Democratic candidate for governor whose sign is left unmolested. (No suggestion is that she is involved with the theft/vandalism.) Her policies are abhorrent to pro-lifers and conservatives. But anyone who speaks to Brenda Siegel hears her intense, heartfelt conviction that the State of Vermont isn’t doing right by her people. Kind of like Kathi Tarrant.

So here’s an editorial suggestion: until next Tuesday at 7 p.m., let a thousand campaign signs bloom in VT. Voters’ thoughtfulness, not vandals thievery, should determine whether Kathi Tarrant wins the election.