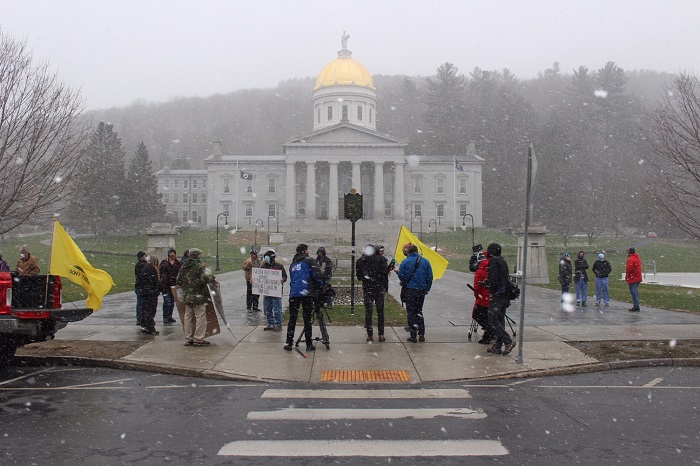 FREEZING IN APRIL: Dozens of Vermonters braved late winter weather Wednesday to send a message that failing state economies are as much or more of a problem as the coronavirus pandemic.

MONTPELIER — Amid freezing temperatures and a spring snowfall, dozens of liberty-minded Vermonters with flags and signs met Wednesday at the state Capitol to send a message that the shutdown response to the coronavirus has gone on long enough.

As snow fell throughout the late morning and early afternoon, some protesters against Gov. Phil Scott’s “stay home, stay safe” orders held signs, while others drove by in vehicles and honked horns — actions that mirrored dozens of protests across the country over the past week aimed at getting people and businesses back to work.

Georgia, Florida, Texas, Tennessee, Oklahoma and South Carolina have started reopening their economies this week after a month of stay-home orders and business shutdowns. Gov. Phil Scott has said small outdoor crews could get back to work in sectors like construction and landscaping, but restrictions on restaurants and other service industry jobs are still hurting the economy and causing massive job losses.

Chris Richardson, of Williston, lost jobs in the restaurant industry and martial arts training due to the governor’s orders. He now has to figure out how to support his family, which includes a wife and two young children. He criticized media coverage of the virus, suggesting that it has exaggerated the threat while downplaying the economic collapse caused by governors’ responses to the pandemic.

“I would like to see honest reporting instead of repeating stuff from the big major news outlets all the time,” he said, standing outside of the Statehouse. ” … I want to get to the bottom of what’s going on with real info. I don’t want to be spoonfed the official propaganda all the time, all the talking points from the big news media.” 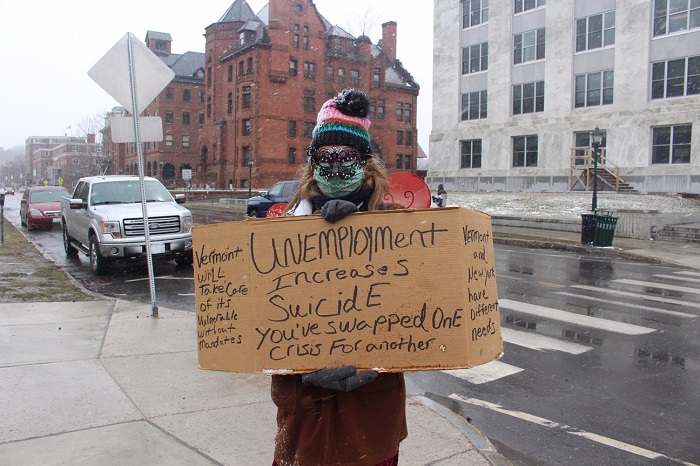 One masked protester holds a sign that reads, “Unemployment increases suicide – you’ve swapped one crisis for another.”

Others let their voices be heard as well. One sign held by a protester read “Everyone is essential.” Another stated “Gov. Scott’s cure is worse than the illness.” Still another carried the message that unemployment resulting from the governor’s economic shutdown could cause suicides to rise.

After mainstream media initially reported projections of millions of potential U.S. deaths from the coronavirus — which led governors to shut down state economies nationwide — more recent projections predict between 40 and 100 Vermonters will die of COVID-19. Nationally, about 60,000 Americans are expected to die during the pandemic.

Beth Smith, of Essex, came to the capital with her son to participate in the protest. She said while projections for deaths from the virus have dropped dramatically, the governor has done little to loosen his restrictions on businesses and individuals.

“Initially we took steps that we thought were necessary and seemed well thought out. And then, as the models have changed, I’m just disappointed that we haven’t changed the way we are handling the virus and our approach,” she said. “I just think we need to take some common sense measures — 60,000 [deaths] is on par with the flu, and 54,000 Americans died last year from suicide.”

Smith said the governor’s incremental approach is not good enough.

“It’s just too far out, it’s not taking into account where we’re at right now, the numbers that we’re seeing,” she said.

Debbie Regimbald was one of the event organizers. She said the government is attributing deaths to COVID-19 without positive test results.

“They are counting like any kind of death,” she said. “I don’t trust the numbers from the government, they don’t mean a thing to me.”

State and federal guidelines allow COVID-19 to be listed as the cause of death even when a decedent didn’t test positive for the virus or was never tested. New York’s coronavirus death toll jumped by more than half in a single day last week when state officials decided to begin counting deaths assumed to be linked to the virus without a positive test result.

Tristan and Brodyn Joy, two brothers, also braved the bad weather Wednesday to protest the shutdown. Tristan Joy said he also questions whether the numbers justify keeping everyone sheltered in place at home.

“I personally think that the death numbers are off,” he said. “… I also think there are people that have gotten better from it and have had it but just didn’t know it.”

A new study out of Stanford University on COVID-19 infections in Santa Clara County, California, found that when asymptomatic carriers of the virus are properly counted, the true death rate of COVID-19 could be as low as 0.14 percent or less — a death rate in line with seasonal influenza. The rate equates to 14 deaths or less per 10,000 people infected.

“Have we set a new standard in all of this?” he said. “Every time some sort of health concern comes up like the fall flu, are we going to commit economic suicide?”

Some protesters said they expect bigger protests as the weather improves.

“As it gets warmer and as the lockdown continues and as people get more antsy and stir-crazy in their house, and the weather is nicer and people are really feeling the pressure more of not having work, these rallies will become so much bigger,” Richardson said.