Editor’s note: This commentary is by Shannara Johnson, of Morrisville. She is running for state representative for the Lamoille-Washington district.

A couple of months ago, I said on our local Front Porch Forum that I was kind of wary about the mandatory composting that we all have to do as of July 1 here in Vermont. We’ve already seen more black bears coming dangerously close to homes than in previous years, and I figured once everyone started composting, we’d see much more of this.

I was immediately shouted down by the FPF community. Bears and other wildlife raiding compost bins, I was told, “won’t be a problem at all if you do it right.” All I had to do was add a layer of “brown matter,” some dirt or cardboard or leaves put on top of the compost and everything would be fine. 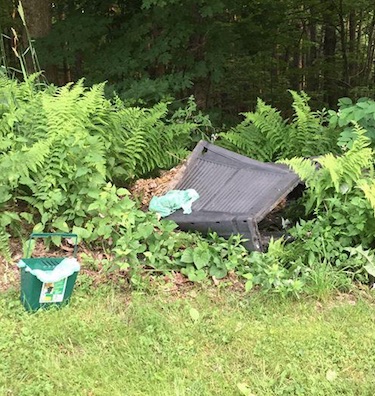 “Today I went into the backyard to deposit the second load of food scraps and found the compost bin smashed to pieces. So apparently now we have bears in our backyard, which we didn’t before.”

I also asked, “What about the people who live in apartments or townhouses/condos and don’t have the wherewithal to do their own composting?”

“No problem at all,” said the compost aficionados. “If you don’t want to compost, you can just have Casella pick up the food scraps, or you can bring them to one of the transfer stations yourself.”

I silently wondered how poor people would be able to afford to pay Casella or a transfer station for this service, and also, how people with a regular job (or two or three) would find the time to do all this. I didn’t ask those questions out loud, though, since my first post had already occupied FPF for about a week.

So I called Casella, and they told me they weren’t equipped yet to pick up food scraps. I later read that they had implored Montpelier to indefinitely delay the mandatory composting, to no avail.

Then I learned that there were several drop-off points where I could drive (again, what about the poor people?) to get rid of my food waste. The closest one in Morrisville is open only on Saturdays. Neither will be any of the others, and being someone who actually works, I can’t drive from town to town in search of a home for egg shells and banana peels.

So I decided maybe home composting wouldn’t be so bad. On July 1, like a good little trooper, I brought out a bin of food scraps to our big black plastic compost bin in the backyard. It hadn’t been used for a long time, so there was ample “brown matter” for me to layer over. I closed the lid and felt kinda good about myself. Like, really earthy and all that.

Today I went into the backyard to deposit the second load of food scraps and found the compost bin smashed to pieces. So apparently now we have bears in our backyard, which we didn’t before — which means I can’t let my older dog out by himself anymore, and my cat, well, I guess he’ll just have to learn to run faster. My son and I won’t be able to hang out in the backyard anymore; what if you fall asleep in your lounge chair and wake up with a big snuffling snout in your face?

Now we have the choice to either break the law by using the regular trash for our food scraps, or dump our food waste on top of the destroyed compost bin and just let nature take its course. Today I did the latter. Tomorrow we’ll figure it out.