A woman in Barre Town, excited by the epidemic of statue demolishing, is calling for removing the statue of Col. Ethan Allen from the front portico of the Vermont State House. Why? Because Ethan and his brothers led and defended the white settlement movement into the New Hampshire Grants in the 1770s, and the land once roamed by the Abenaki ended up in Anglo ownership. 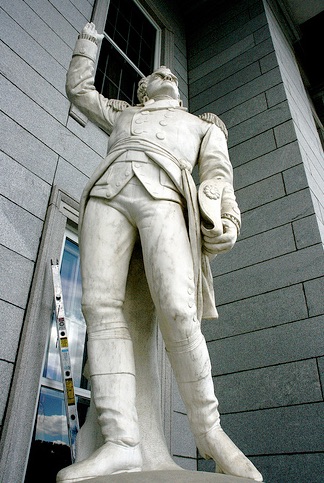 Sculpture of Ethan Allen carved by Aristide Piccini in 1941. Located at the Vermont State House.

It’s true that in the 17th century white settlers pushed northwest into what is now Vermont. The Abenaki living here resisted, and gladly cooperated with the French in Canada, who wanted to stem British expansion. There were three bloody Abenaki Wars, the last one ending well before Ethan was born. Most of the Western Abenaki nation had departed north to friendly Quebec by Ethan’s arrival in 1770. Ethan battled the Albany Junto in defense of land patents granted by New Hampshire.

There is no record of Ethan ever engaging in hostilities with the Abenaki. He was reported to have claimed that there were no Indians left in the Grants, which may not have been entirely true.

Doubtless he was a racist, like all white settlers of Vermont who, mindful of the French-sponsored Abenaki massacre of whites at Deerfield, Massachusetts, in 1704, regarded the Abenaki as primitive, ignorant and frequently bloodthirsty savages.

But to take down Ethan’s statue from the State House is totally unmerited, and I would hate to see anybody try it.