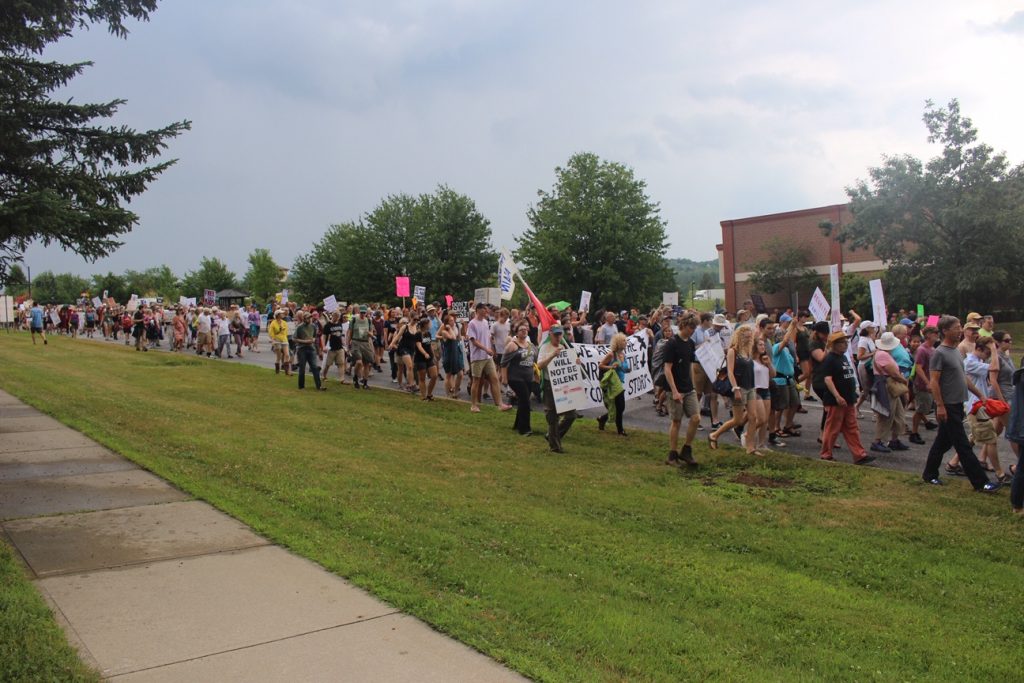 “NO BORDERS, NO WALLS!”: Marchers by the hundreds chanted “No KKK, no fascist USA, no ICE” as they moved around Williston calling for an end to the “concentration camps” at the southern border.

WILLISTON — Several hundred protesters took to the streets of Williston on Sunday afternoon to express their opposition to immigration detentions and any cooperation between Vermont and U.S. Immigration and Customs Enforcement.

The demonstrators began their march around 3 p.m. at Vermont Technical College before moving along to an office building that takes tips to help federal immigration officials respond to illegal immigration activity.

“It’s not this specific campus, but Vermont Tech [Vermont Technical College] as a whole had a contract with ICE and they benefited financially off of ICE as an institution, and we are opposed people profiting off the work that ICE does,” she said. “They don’t have a contract currently, but they haven’t disavowed themselves from doing it in the future again.”

She said while the protesters may have differences on the issue of having immigration enforcement, most agree on closing down detention centers that hold illegal immigrants while they are being processed in the immigration system. 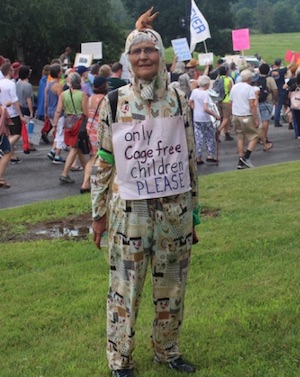 This protester, who is dressed up as a chicken, is expressing the view that children held in detainment centers are being treated like animals.

“There are some basic common denominators which everyone agrees, which is to close the camps and reunited the families,” Siegel said.

Speakers at the march included Beverly Little Thunder, an enrolled member of the Standing Rock Lakota Band from North Dakota and a board member for the Peace and Justice Center. She opened her speech by stating that part of Williston is occupied land which was stolen from the Abenaki Native Americans.

“What’s going on right now down in the South is not new,” she said. “The government has had a long history of separating families and taking children away.”

The angst behind the protest has been fueled in part by purported photographs of children in “cages” eventually linked to detainment facilities run under the Obama administration.

Speaking about the plain office building being used by the Department of Homeland Security, Beverly Little Thunder suggested that the workers aiding federal law enforcement were in some sense committing atrocities.

“It’s like a virus that kind of snuck into our communities,” she said. “When they built this building, they didn’t say what they were building. There are not even signs identifying the building — you could just drive by it and not know the horror that was being implemented inside these walls.”

Yolana Huerta, a speaker who has lived in the Mexican neighborhoods of East Los Angeles, said she has lived through numerous ICE raids aimed at stopping illegal immigrants. She also blasted the detention centers, claiming they lacked basic necessities.

“Many of us are here because we have seen graphic images of kids packed in cages. We’ve heard that ICE agents don’t think that ICE agents think toothpaste and toothbrushes are a necessity,” she said.

Other visitors to the centers have contradicted the claims that the facilities lack basic necessities.

“These facilities, they are not a Holiday Inn, but they have running water, they have cots, they have rows and rows of porta-potties which are getting cleaned out daily,” Joseph Sysling, a resident of Katy, Texas, told True North earlier this month.

Huerta also cited the deaths of Óscar Alberto Martínez Ramírez and his 23-month-old daughter, Angie Valeria, as examples of abuse. The two drowned during a desperate attempt to cross the Rio Grande after being rejected for asylum.

While that incident has been highly publicized, more than 20 similar tragedies occurred during the Obama administration.

“It’s horrific,” she said. “It’s similar to pre-World War II with Germany and Hitler, I think. The detention camps are in horrific conditions for people — and especially to take the children away from their loved ones and parents and having them in squalor.”

While the Trump administration has been criticized for separating children from adults thought to be parents and relatives, a report from May indicated that DNA tests done on adults with children showed no blood relationship in 30 percent of the cases.

Department of Homeland Security (DHS) Secretary Kristjen Nielsen recently stated that 10,000 of 12,000 unaccompanied children were brought across the border by someone other than a biological parent.

Some people at the march were on hand to defend federal law enforcement.

John and Theresa Virginio, of Lincoln, expressed their support to local media.

“We’re very proud patriots. We’re very proud of our law enforcement, ICE, border patrol, state and federal law enforcement, FBI, all of it,” John Virginio said. “So we felt it’s important to show that there is support for them as opposed to the last 10 years of the bashing that they’ve taken from the prior administration and people like this who are here.”

He suggested some in the crowd had been making it difficult for them to be seen. At one point, one of the anti-ICE protesters approached the scene and reminded her fellow protesters that everyone has a right to hold their signs.