RUTLAND — Last week Vermont Attorney General T.J. Donovan hosted a public forum for the Rutland community on issues of “hate” and racism in the Green Mountain State. It was part of Donovan’s new statewide series that included more than 70 city officials, police officers and residents.

The forum, held July 25 at the Rutland High School cafeteria, was a no-holds-barred opportunity for many to share their personal experiences about discrimination, racial and religious prejudice, and even gender bias across the region. 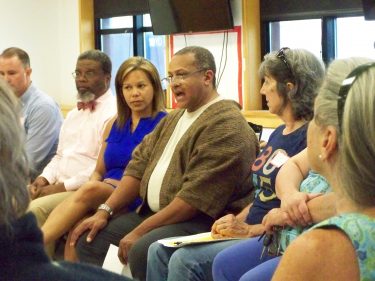 Among those attending the meeting were Rutland Mayor David Allaire and Rutland Police Chief Brian A. Kilcullen, as well as representatives of the Vermont State Police. Also in attendance were Rep. Thomas Burditt, Rep. Cheryl Mazzarello-Hooker, and Rutland County State’s Attorney Rose Kennedy.

In recounting their personal stories, forum attendees were asked by Donovan not to identify names of alleged racists due to potential “slander concerns.”

While the event sometimes resembled a gripe session, the speakers were nevertheless heartfelt in their accounting of what they believe is ongoing systemic racial bias within the Rutland community.

Several unidentified speakers expressed concerns about conditions at Mill River High School, including accounts of an unnamed teacher who allegedly gave students of color short shrift in the classroom when it came time for students to select a book for the class to read and discuss.

Another attendee reported gender bias at Rutland Regional Medical Center. A woman recounted her run-in with an alleged “cult” of hate operating out of a restaurant in downtown Rutland. The name and location of the establishment was not revealed.

Other residents stood up to offer speakers their support, but without specific stories of their own to share.

State’s Attorney Rose Kennedy said that domestic violence, along with all the other problems discussed, was of interest to her office, yet is often hidden in the shadows.

Under Donovan’s guidelines for the forum, specific names and dates were not mentioned regarding the incidents and of alleged offenders. As a result, many of the stories shared at the event were anecdotal. 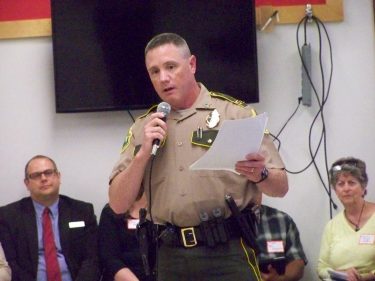 Regarding policing throughout the Green Mountain State, Capt. Gary Scott of the Vermont State Police reported that the state’s top law enforcement agency has been collecting data of traffic stops since the year 2000. He stressed that the police continue to improve data gathering and reporting to the public.

Scott noted that in 2018, 1,500 black motorists were stopped statewide. While walking a delicate political line, he also said the Vermont State Police was “getting heat” from the U.S. Border Patrol for not calling the agency enough on various border infractions. The acknowledged clash with federal law enforcement authorities, while not specified by Scott, is likely related to the state’s trend toward becoming a “sanctuary state.”

Scott added that he is “concerned” about statewide search rates. The search rates for white motorists is 0.6 percent, according to Scott.

“But … black operators are at about 1.6 percent, and then (search rates for) Hispanics are about 1.9 percent,” he noted.

Chief Kilcullen said that the city’s traffic-stop database is not as well developed compared to the State Police. He also promised to be more transparent and to post data on the department’s website.

When the NAACP’s Moore asked Kilcullen if he would consider a citizens panel for advice and guidance, he agreed readily.

According to Curtiss Reed, Jr., Rutland’s ongoing and future economic viability is only as good as its embracing of a diverse community of residents. He warned that the region is in peril if it ignores the economic and cultural contributions made by residents of color.

“Overall, I am bullish on Vermont,” Reed said, “ … but if your town doesn’t want to acknowledge black and brown people, or if your reputation is one that is culturally intolerant, then you’re shooting yourself in the foot economically.”

Reed stressed that white leaders need to wake up to the area’s changing demographics. He said that the black business sector is growing and entrepreneurs of color may go elsewhere to do business. When compared to Rutland, Reed said that many black business people are looking at Burlington, Brattleboro and Winooski as more welcoming communities.

Attendees expressed solidarity in keeping on the pressure with community leaders and the public in making incidents of “hate” more visible regardless of comfort levels.

“If we don’t speak up, they won’t ever think it’s a problem,” NAACP’s Tabitha Moore told forum guests.