This commentary is by JT Dodge, who is running for state Senate in the Caledonia District as a Republican. The GOP primary election takes place Aug. 9. 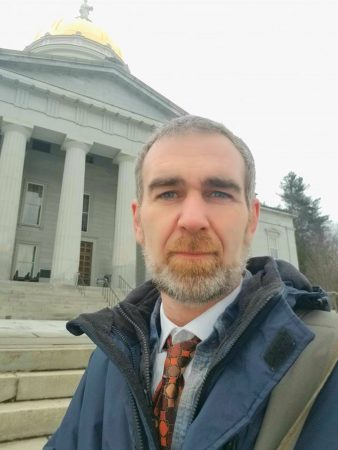 I can understand how difficult it would be for a politician to argue for new taxes without knowing how much they would cost and without taking personal responsibility for the decision.

Rep. Campbell and Sen. Kitchel wanted an unelected board to inform the Legislature as to how much money should be added to the annual expense of heating a home. When the annual dollar figure is released, they could both shrug and say, “Hey, that wasn’t me.”

As if this wasn’t insidious enough, these politicians and the Climate Council appeared to be attempting to portray fuel delivery companies as greedy bad guys. In reality, these legislators support a state-mandated credit system that forces fuel dealers to buy credits from “Efficiency Vermont” and Burlington Electric. If fuel dealers accepted this regulation without boosting fuel delivery rates, many of these vital businesses would be lost.

If Governor Scott had not vetoed this bill, Vermonters’ home heating fuel costs would have been forced up beyond inflation and speculation for potentially the next 50 years.

The Clean Heat Standard is like raising taxes on sugary beverages: taxing the poor to change purchasing behaviors.

The idea behind this is if sugar beverages cost more, then folks will change what they normally consume to other selections, which are theoretically healthier. And this type of tax is almost always sold to us as a “public good.” The climate caucus, lobbyists, and the legislators that voted for this directive explained that this mandated cost added to heat fuel is also to change behavior. They believe that the behavior will be changed to buying an electric vehicle and an electric heat pump, not turning the thermostat down to an uncomfortable temperature, skipping some prescriptions, and/or scrimping on nutrition.

This logic doesn’t really compute. Most Vermonters are of limited means, and are striving to achieve a firm grip on middle-class life. To many, achieving a stable middle-class existence is what resiliency looks like. Full “decarbonization” and “electrification” would destroy Vermonters’ resiliency. As the state with the lowest carbon dioxide emissions and one of the coldest and most rural states, we must maintain a wide choice of fuel types. Anything else will increase and create additional hardships for our rural populace.

I want to take a moment to mention the NEK representatives that had our backs when they supported Governor Scott’s veto of this hurtful bill. The veto was successfully maintained, but only narrowly because the opposition required only one more vote.

To those House representatives that chose political bravery by supporting Gov. Scott’s veto, thank you. I am very proud of all of you and those Vermonters that got the word out. I am confident that when Vermonters realize what almost passed into law they will approach you on the street and thank you themselves. Be proud as you have carried out your responsibilities in a way that reflects the public trust that has been placed in you.

My name is JT Dodge. I am running for Caledonia District Senate in the Republican Primary election on Aug. 9. I plan to challenge Sen. Kitchel and the climate lobby on their support for this terrible idea.