In interviews with True North, each candidate made the case for why he should be the people’s choice on Election Day.

In Paige’s view, Condos lets partisan politics creep into what is supposed to be a nonpartisan office. 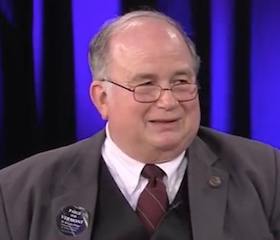 “He’s a political person. He’s interested in maximizing the opportunities of the Democratic Party in elections and influence within government and minimizing everybody else,” he said.

In any given state, the secretary of state is the top elections official. It’s no surprise, then, that the candidates have traded barbs over such hot-button topics as election security and “voter suppression.”

“I want to see as far as elections that we have restored integrity to the election system,” Paige said. “Not only do I want to make sure there’s no fraud going on, but I want people to know that there’s no fraud is going on.

The Washington resident said he estimates that as much as 4 percent of votes are fraudulent in the state.

“Duplicate voting, dead people voting, students voting both here and in their home state — pick all the machinations you can think of and I think that’s maybe no more than 3 or 4 percent.”

Paige cites a study on voter fraud conducted by former Auditor of Accounts Randy Brock, now a Republican state senator. It showed that the statewide checklist included many dead people and people who had moved away.

“He found that not many of those dead people were actually voting in Vermont, which is a good thing,” he said.

Voter fraud isn’t unheard of in Vermont. In 2017, the town of Victory discovered that many second-home owners were participating in elections when they shouldn’t be.

Paige said Condos’ time in office has only increased suspicion about fraud.

Condos, on the other hand, vigorously defends the way his office runs elections, especially as it relates to the voter checklist and the other duties of the office. He responded to some of the allegations by Paige.

“Mr. Paige clearly does not understand or recognize the changes that have been implemented over the years,” he told True North.

He said a lot of the criticisms, including those which resulted from Brock’s study, no longer apply to the updated system, which was modernized in 2015. He added that town clerks also play a role in keeping voter rolls accurate and up to date.

“[Paige] also misunderstands the process when he criticizes me over decisions that are left to local officials. The Town clerks are responsible for adding people to the checklist,” Condos said. “The Boards of Civil Authority are responsible for removing. And there is a process for challenging those decisions.”

He also notes that the current system is able to be audited so it can be determined if someone has voted more than once in an election.

“When someone registers to vote, the system automatically looks to see if that individual is registered in another town. …  And if yes, it will notify that clerk to remove the person.”

He added that having dead people on the checklist is a reality in all states and takes time to update.

But he said is office is ahead of the curve on the issue of election cybersecurity.

“Fortunately … we had started in 2013 to focus on cybersecurity. … Today, we are considered a national leader in protecting the integrity of elections systems.”

He added that his office is implementing a state-of-the-art notary public commissioning process to replace an outdated system which was divided between the judiciary and their office.

He’s also working with Commerce and Community Development, and Digital Services to create what’s called a “BizPortal,” which streamlines the state administrative processes so that businesses can move on to other priorities.

Each candidate has different estimates for the number of eligible voters in the state, with Condos figuring about 520,000 and Paige calculating the figure at 497,394.

Paige also wants a caucus primary system, in part to prevent voters from crossing party lines to intentionally manipulate elections. Condos is OK with the status quo, which is the open primary system.

Condos is not in favor of voter ID, and says states that pass laws are out to intimidate voters. Paige is in favor of voter ID laws, and he said the population that allegedly can’t get IDs easily is not well defined. He argues that requiring voters to show identification would go a long way toward eliminating voter fraud.

Images courtesy of Wikimedia Commons/EPP and state of Vermont