The Supreme Court will confront a range of gun rights cases in the coming months, as the nation reels from brutal mass shootings in El Paso, Texas, and Dayton, Ohio, that left over 30 people dead.

Matters now pending before the justices include a dispute over New York City’s gun transportation regulations, challenges to permitting laws in Massachusetts and New Jersey, and a lawsuit victims of the Sandy Hook massacre brought against gun giant Remington Arms. 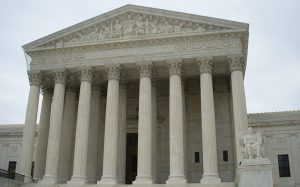 Though the Second Amendment area is rich with opportunity for the Court’s newly-entrenched conservative majority, the justices may choose to follow a quieter course given recent events, particularly since the coming term is heavy on politically salient cases like gay rights and the Deferred Action for Childhood Arrivals (DACA) program.

The high court may hear its first Second Amendment case since 2010 when the justices return in October. At issue is a New York City ordinance governing the transportation of firearms. The rule authorizes licensed gun-owners to carry firearms to one of seven gun ranges, and prohibits them from moving their weapons beyond city limits.

A coalition of gun-owners who wish to transport their firearms to vacation homes and marksmen competitions outside the city challenged the ordinance in federal court. A trial judge and the 2nd U.S. Circuit Court of Appeals sided with New York, prompting an appeal to the Supreme Court.

After the justices decided to take the case in January, the city replaced the contested ordinance and asked the justices to dismiss the case as moot. The new rule allows license holders to transport guns “to and from various locations previously forbidden or not expressly authorized,” including vacation homes and shooting competitions. What’s more, a new state law provides similar protections, making the case “doubly moot” in the city’s view.

The plaintiffs counter that the new rules still treat gun transportation as a privilege to be micromanaged, “rather than an individual right.”

“The city continues to claim plenary authority over any transport outside the home, and its revised rule is plainly designed to provide the bare minimum of what the city believes will suffice to moot this case, and not an inch more,” lawyers for the plaintiffs wrote in court papers.

The high court is generally dubious of efforts to moot cases after review is granted. Arguments have not yet been scheduled.

A coalition of gun rights groups are waging a concerted campaign against so-called “good cause” permitting regimes. Such systems require applicants to convince public officials of their unique need to carry a firearm in order to obtain a concealed carry license or some such similar permit.

Two lawsuits pending before the high court challenge New Jersey’s “good cause” permitting law, which requires applicants to prove they have a “justifiable need” to carry a weapon. The state defines justifiable need as “the urgent necessity for self-protection, as evidenced by specific threats or previous attacks which demonstrate a special danger to the applicant’s life that cannot be avoided by means other than by issuance of a permit to carry a handgun.”

“The minuscule fraction of New Jersey citizens who are able to obtain permits is so insubstantial that, in practice, the system operates as the near equivalent of a ban,” one petition to the high court reads.

New Jersey resident Thomas Rogers brought the first of the two lawsuits. Rogers wishes to carry a firearm because he runs an ATM business that requires him to visit high-crime areas. Police officials and a state judge denied his application. The Association of New Jersey Rifle & Pistol Clubs joined Rogers’s lawsuit.

The 3rd U.S. Circuit Court of Appeals, which hears appeals arising from Delaware, New Jersey and Pennsylvania, upheld New Jersey’s law against a constitutional challenge in 2013. Lawyers for Rogers say that ruling is “diametrically opposed” to subsequent decisions from other federal appeals courts. For example, the U.S. Court of Appeals for the D.C. Circuit struck down the capital’s “good reason” permitting scheme in 2017.

The Supreme Court is more likely to intervene in cases where multiple courts disagree over the same question of law.

In rebuttal, New Jersey says its public carry law is one of the reasonable, longstanding prohibitions on gun rights that the Supreme Court protected in its landmark 2008 D.C. v. Heller decision. Throughout the 19th century, numerous states including Wisconsin, Maine, Michigan, Virginia, Minnesota, Oregon, Pennsylvania, Texas and West Virginia, required that individuals show “a reasonable cause to fear assault” to carry firearms in public places, according to state lawyers.

The state also says Rogers is overstating the extent to which the federal courts disagree over “good cause” laws.

Though Rogers and the state have submitted their legal briefs to the justices, the case has faded from the Court’s docket. The justices were scheduled to discuss the dispute at a private conference on May 23. The Court did not act on the petition after the conference, nor was the case scheduled for the four conferences that followed before the summer recess.

Another New Jersey resident, Mark Cheeseman, brought the second case. Gun rights groups like the Firearms Policy Coalition and the Second Amendment Foundation are supporting Cheeseman before the justices.

Cooper & Kirk is also litigating a similar challenge to the Massachusetts law in the Supreme Court. Much like New Jersey, Massachusetts requires that citizens provide a “good reason” for carrying firearms in public.

“The core right protected by the Second Amendment is — as Heller described it — ‘the right of law-abiding, responsible citizens to use arms in defense of hearth and home,’” Judge Bruce Selya wrote for a unanimous panel. “Public carriage of firearms for self defense falls outside the perimeter of this core right.”

Congress gave gun manufacturers a litigation shield in 2005 when it passed the Protection of Lawful Commerce in Arms Act (PLCAA) in 2005. The law generally protects industry groups from liability when individuals use guns to commit crimes. It applies in state and federal court. An exception to the PLCAA cancels the liability shield if a gunmakers breaks a law “applicable to the sale or marketing of the product.”

The Sandy Hook plaintiffs argue Remington did just that. They say the advertising campaign the company used to promote the weapon lionized its destructive capacity with slogans like “Forces of opposition, bow down. You are single-handedly outnumbered,” or “Consider your man card reissued.”

The plaintiffs argue that those promotional materials, which they call “militaristic,” effectively encouraged buyers to use the XM-15 for illegal purposes. That would violate the Connecticut Unfair Trade Practices Act (CUTPA) and cancel PLCAA immunity.

The Connecticut Supreme Court allowed the lawsuit to go forward on a 4-3 vote in March. In turn, Remington appealed to the Supreme Court. The company said the Connecticut panel embraced a novel legal theory that will cripple the gun industry.

“Because all states have analogous unfair trade practices laws, the decision below threatens to unleash a flood of lawsuits nationwide that would subject lawful business practices to crippling litigation burdens,” Remington’s petition reads. The plaintiffs have not yet responded to Remington’s filing in the Supreme Court.

The justices will not hear cases until the Court’s new term begins in October.