Gov. Scott has signed H.511, making Vermont the first state by legislative process to legalize pot for recreational use. On July 1, it will be permissible to possess 1 ounce of pot and store an unlimited quantity harvested from two mature plants. 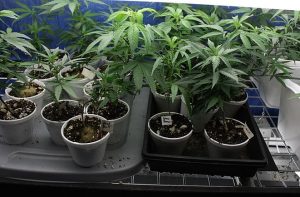 Marijuana legalization is causing concerns across the U.S., especially due to increased incidents of driving while stoned.

If the governor’s oft expressed requirement that children must be protected in situations from pot exposure by adults is sincere, why didn’t he insist on their protection in homes where exposure will likely occur? He boasts of requiring provisions making it criminal for “using marijuana in a motor vehicle with a child present” and for “using and growing marijuana at facilities servicing children,” but did not in the homes where marijuana is grown, used and stored in unlimited, uncontrolled amounts.

The governor’s personal belief “that what adults do behind closed doors and on private property is their choice, so long as it does not negatively impact the health and safety of others, especially children” is full of empty words. Children have little or no control over their home environment and what they are exposed to.

Harvested quantities vary due to plant size, growing conditions and skill of the grower. One plant can produce 5 pounds of pot. State Rep. Cynthia Browning offered an amendment to limit the allowed accumulation to 2 pounds, but that was defeated in a House vote. What should have been a child health-and-safety red light for the governor was ignored.

Even 2 pounds of pot produces up to 1000 joints, but under H.511, no such quantity limit exists. With pot stockpiles in homes, Vermont will soon, as Colorado does now, experience home invasions, diversion and sale, as well as access for children. A play day at a friend’s house can be a real health-and-safety threat for that visiting child.

Tetrahydrocannabinol (THC), the psychoactive ingredient in marijuana, is commonly put in edibles such as soda pop, brownies, lollipops and even gummie bears. Such products are a lure to children. THC in pot in the 1960s to 1990s was 1-3 percent, but now is 15-18 percent and even higher in concentrates that can have 100 percent THC content. High potency THC causes psychosis, suicides, murders and other violent acts, as well as impaired driving.

Former Gov. Jim Douglas said no good reason exists for legalization. Gov. Scott had a reason. He promised someone he would support it. Why, when H.511 is a child endangerment bill? By supporting it, he ignored the urging of seven Vermont medical organizations, law enforcement, educators, the Vermont Department of Health, and the head of the state police, who said more people will die if this becomes law and he even ignored the teachings of his Marijuana Commission. Legalization by H.511 reduces a youth’s perception of harm and provides no actual protections to them.

How a governor of Vermont, having been fully informed, whose sworn duty it is to protect the citizens, could flout federal law that makes possession illegal, and put citizens and their children at risk to be injured and die as a result, is incomprehensible.