While he remained upbeat and praised lawmakers for their civility despite ideological differences, the governor nevertheless said Vermont was facing the “blunt reality” of a continued affordability crisis. While lean on budget specifics, Scott promised a “results-based” approach when he presents a 2018 budget in a few weeks. 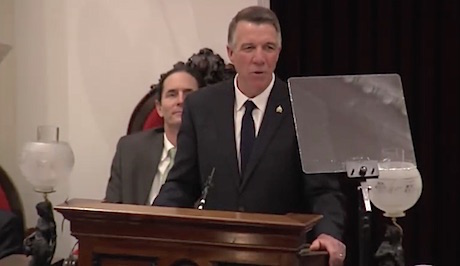 “It will once again be tied to a growth-rate calculation based on real data, reflecting growth in wages and the economy, not predictions that have fallen short far too often,” Scott said. “I’ll call for continued fiscal discipline because Vermonters still cannot afford higher taxes or fees.”

Last year, that fiscal discipline involved closing a budget deficit of $60 million with no new taxes and fees, and holding growth in spending to about 1 percent.

Throughout the nearly 40-minute speech, Scott stressed that his administration will be aggressive in keeping statewide property taxes from increasing in the new year despite declining student enrollment and ever-increasing education spending.

Scott’s financial solutions included a series of “cradle to career” programs aimed at growing the economy and attracting workers. He touted last year’s child care investments of $2.5 million as well as  $3 million for the Vermont State College system.

During 2017, Scott also rolled out his 70x2025vt workforce development program, which has a goal of getting 70 percent of Vermont’s population armed with either trade or higher education credentials by the year 2025. While the governor’s goals have long-term targets, he said a growing number of local employers need eager skilled workers today.

Scott cited several examples of Vermont manufacturers on the high road to expansion, but he implied that they are struggling to bring skilled workers online quickly:

“These are great jobs, but we need the people to fill them (now),” Scott said. “Whether employees are needed for a business to grow or just keep its doors open, there’s a common theme here: We need more workers. We cannot afford to ignore this any longer.”

To help fill the need, Scott suggested tapping into a pool of skilled Vermont National Guard members. “A good place to start is in recruiting from a pool of talented, committed workers already here in our state: our National Guard and retired, full-time service members,” he said.

To that end, he called for tuition-free college for for National Guard members.

“When a veteran is looking to transition from full-time service to the workforce, we’re going to make sure they receive credit for skills they learned while in uniform by working with the Secretary of State to expedite professional licensing.”

Scott also said that to make Vermont more competitive, especially in luring those skilled ex-military personnel, he would work to remove the income tax on military pensions.

To attract new young workers, the governor called for “direct outreach to individuals and businesses,” including results that are “tracked and reported” to the Legislature.

To buttress the push to both train in-state residents and import skilled labor, Scott returned to his early 2017 goal of expanding housing opportunities statewide in an effort to make relocation fast, attractive and affordable.

“Last year we made the single largest investment in housing in our history with a $35 million housing bond, which leveraged another $65 million in private investment, to increase the availability of decent, affordable homes for our (existing and future) workforce,” Scott said.

Touting a total goal of 600 new housing units, with more than a 100 units now under construction, Scott said the effort will attract new workers to Vermont while adding $10 million in new wages.

“Looking ahead, we must continue to help startups grow and businesses thrive so they can increase wages, increase new jobs and help generate revenue organically,” he said.