MIDDLEBURY, Vt. — While Vermont Gov. Phil Scott hasn’t been seen stumping for many Republican candidates ahead of the Nov. 6 election, on Tuesday he joined independent Addison County state Senate candidates Marie Audet and Paul Ralston during a campaign swing through Middlebury. 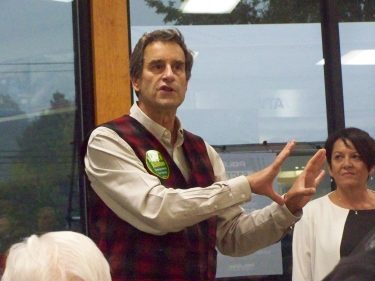 During the chilly, rainy evening gathering at Champlain Valley Equipment, Scott said that his five terms in the state Senate prepared him for this year’s reelection bid.

“I’ve served in the minority all my political life — never the majority, not even close,” he told attendees. “I am still the only statewide Republican officeholder in the state. Regardless of what you read, regardless of all the drama, the tension and so forth, we got something done over the last two years.”

Scott stressed that there’s a lot at stake in this election and that the contrast between the two candidates for governor is clear. However, Scott neither referred directly to Democratic opponent Christine Hallquist.

“Two years ago, Vermonters elected me to focus on the economy and make Vermont more affordable. I know there’s still so much more work to do,” Scott said.

The governor delivered his standard stump speech, noting that during his first term he kept residential property tax rates level, added no new or increased taxes in the General Fund, eliminated the income tax on Social Security for low- and moderate-income Vermonters, cut state income tax rates by $30 million and passed a $35 million housing bond, among other things.

He also took some credit for 4,400 new Vermonters in the workforce and for the newly passed tuition entitlement for current and future members of the Vermont National Guard. 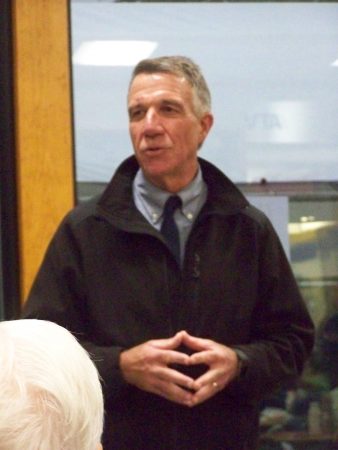 Gov. Scott: “I am not going to become an independent, I’ve always been a Republican.”

A voter face-to-face on guns

One event attendee, Middlebury resident Thomas Sinacore, said that he listened to what Scott had to say with respect, but wasn’t buying everything the candidate mentioned.

Sinacore said that while he voted for Scott in 2016, he isn’t sure this year, primarily because of the governor’s “flip flop” on gun control earlier this year, especially the law regarding background checks for private gun sales.

“You don’t punish people before the crime. You’re punishing me (as a gun owner) and I don’t plan on shooting anyone,” Sinacore told Scott.

Scott told Sinacore that he stands behind his decision to restrict gun sales to young people, noting that the teen who had planned to attack Fair Haven Union High School was “dead serious” about targeting potential victims.

“Kids are different now,” Scott told Sinacore. “They don’t have the role models we did as kids.”

“Well, you’re between a rock and a hard place,” Sincore told Scott. “I don’t envy you — many of your supporters are giving you a hard time. So, who am I going to vote for? I don’t want a liberal in the Capitol. We have the transgendered (candidate) or you. Maybe I should write-in (GOP primary candidate) Keith Stern.”

“Well, I am going to suffer whatever the political consequences,” Scott said. “I did what I think was right.”

Sinacore, a retired New York City police officer, said Vermont is a difficult place to live for other reasons.

He added that the state’s high taxes were forcing him to consider leaving.

“I just can’t stay here anymore,” Sinacore said. “I am paying tax on my pension, my real estate tax has gone up, the town of Middlebury is reassessing my house so I can pay more tax, and the realtors are telling me I can’t get what I want for my house.”

Scott told him that his plan to hold the tax on military pensions ultimately failed in the state House of Representatives.

“We shouldn’t be doing that,” Scott said regarding taxing pensions for military. “It would only cost us about $5 million of revenue and it would be give us so much good will … we could add civil servants, like yourself, too.”

Scott has appeared flush on the campaign trail as his war chest is faring better than Democrat opponent Christine Hallquist. Last month alone, the Scott campaign had reported raising $138,080 from nearly 400 contributors, whereas Hallquist’s campaign reported $130,849 from more than 1,200 contributors. Hallquist has refused to accept corporate donations.

Scott is raising larger amounts but from fewer supporters. Overall, the 2018 gubernatorial campaign for both parties lags behind 2016 contribution levels.

Hallquist has received endorsements from former President Barack Obama, former Vice President Joe Biden and U.S. Sen. Bernie Sanders, while Scott, who has distanced himself from President Trump since the 2016 campaign, has received little visible support from prominent Republicans. However, he has received support from moderate Republicans and independents, and received a 100 percent rating from abortion-provider Planned Parenthood.

On hot-button issues in Vermont, Hallquist has pushed for a $15 minimum wage and paid medical and family leave, while the more fiscally conservative Scott vetoed four bills this year aimed at raising the minimum wage and forcing employers to pay for some employee medical services.

True North asked Scott about his support of Addison County independent state Senate candidates Audet and Ralston, noting that he has been absent from Republican candidate forums.