At his weekly presser Tuesday, Gov. Phil Scott again took a strong stance against further COVID-related mandates, saying they cause divisiveness among Vermonters and distrust in the very policies expected to be followed.

“At this point I see no reason to implement broad mandates on Vermonters,” he said. “We have the highest vaccination rate and one of the lowest hospitalization rates in the nation.” 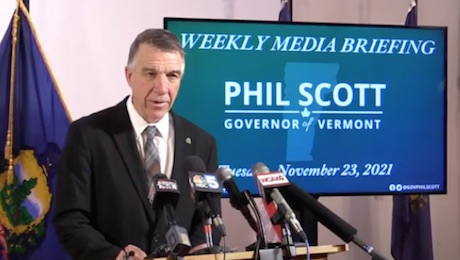 COVID MITIGATION STRATEGIES: Much of Gov. Phil Scott’s press conference Tuesday was spent explaining why mandates for vaccines and masks cause division in communities and lead to distrust of medical policies.

Scott noted that the state Senate passed a resolution Monday that broadly called for “all possible public health measures to reduce COVID-19 spread.” He said this would be unwise.

“As a reminder, all measures mean doing some of the things that we did a year ago —  like banning gatherings and closing businesses, requiring remote learning, and more,” he said. “Think about that: Vermont, the state with the highest vaccination and booster rates, the state that has the highest rate of testing in the country, the state that has the lowest hospitalizations and deaths throughout the pandemic and still has maintained some of the lowest rates during Delta.

“With all that data, 17 senators think we should go back to mandates that almost no other states have in place. So to be clear, I’m not willing to move us backward, and frankly, I think it sends the wrong message about how effective vaccines are.”

The economy suffered under the lockdowns substantially in 2020. In the first few months after shutdowns started, the Vermont Joint Fiscal Office estimated that Vermont faced losses of more than $400 million over the following fiscal year related to slowed or stalled economic activity. The state received eventually more than $5 billion in federal aid to mitigate those economic impacts.

Scott also reiterated that the elderly are the most vulnerable demographic group, with deaths and hospitalizations at low rates for all other populations, according to the latest Vermont Health Department data report issued on Nov. 5.

Vermont’s testing may be focused on populations with little to no risk of death from COVID-19. On page 24 of the report, a graph shows that the elderly, especially starting from age 70 and up, make up the vast majority of all COVID-19 deaths.

Collectively, people over age 70 account for only 11 percent of total COVID-19 testing, according to a graph in the report.

The Scott administration has indicated that frequent testing could continue to be a part of state COVID-policies going forward. It’s still unclear what proportions of unvaccinated compared to vaccinated populations are most frequently receiving COVID-19 tests, as weekly testing is often an alternative option to vaccination requirements for workplace employees.

“The White House [in an earlier conference call with other governors] indicated that they were putting millions into purchasing more, which they hope to quadruple supply by December,” Scott said.

More testing could also lead to more positive cases reported. Page 7 of the Health Department’s weekly COVID-19 report that appears to show a correlation with increased testing and increased percent of positive cases.

Lawmakers on Monday met back at the capital Monday and approved a town-by-town masking approach for Vermonters. Scott said he offered that compromise option at the request of the Vermont League of Cities and Towns.

He reminded his critics that several communities took advantage of the same policy last year without major incidents.