Gov. Phil Scott at his weekly press conference said he has contemplated what to do if border states send illegal migrants to Vermont, and that his administration is working on early contingency plans to be prepared for such an event.

“Obviously we want to welcome as many people as we can into the state, we think that’s part of the answer,” Scott said in response to a question from a reporter. “But we would like to have a little bit of lead time in order to accomplish that. 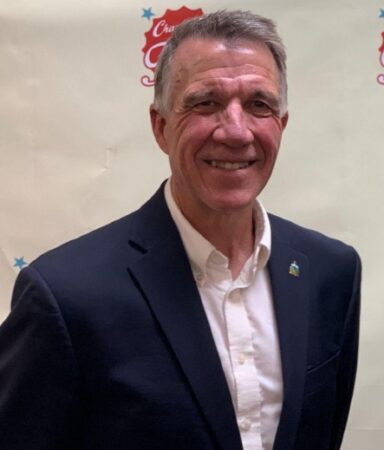 Scott added that he is working on plans “just in case.”

“We don’t believe that they will target Vermont in that way, but you never know,” he said.

Many commentators criticized island residents for hurriedly turning away their newest potential residents, despite speaking often about the need to create “sanctuary” cities and states for sheltering illegals.

Scott’s main focus for the press conference, however, was the latest developments regarding the state’s limited housing availability, which he says affects both existing Vermonters and those wishing to come here.

“It’s no secret that in every corner of our state a lack of housing is a major concern,” he said. “This is impacting Vermonters already here and it’s a barrier towards growing our workforce.”

The governor shared that he’s been tackling this issue since his first term in office when he proposed a $37 million housing bond, which his administration says attracted another $200 million in private investments.

He commented on the problems facing the employment market, which is saturated with job openings in nearly every sector, noting housing situation has exacerbated the situation.

“We know there are people looking to come to Vermont to work but they can’t find decent affordable housing,” he said.

Scott said in total the state has “built or preserved over 2,000 affordable housing units since the pandemic started.” He said that during a typical year housing production would be at about a third of that rate, or just about 300 units per year.

This year there is $20 million available for investments in rural communities, such as helping landlords make appropriate repairs to aged housing and upgrades to keep everything up to standard.

“This program increases the amount of usable housing in stock,” Scott said. “It also helps those who are experiencing homelessness transition into permanent housing. This is the kind of transition that will move the needle.”

He was also asked about the strict travel standards regarding COVID-19 protocols for traveling across the Canadian border. The governor said it is probably wise policy to let those restrictions expire.

“I do think it’s hurt some of the tourism from our Canadian guests; they don’t want to come down because it’s not that flexible,” he said. “… From my perspective I think it’s been counter-productive, and I wouldn’t mind seeing it be dropped altogether.”

Cooperation with the ATF in Burlington

Regarding the formed Chittenden County Anti-Gun Violence Task Force that involves a partnership between Burlington Police and the Bureau of Alcohol, Tobacco, Firearms, and Explosives, Scott said, “We’ve been working with them, we’ve been part of this group that’s being put together.”

He said U.S. and state attorneys are also contributing to these efforts, among other organizations, to address the rapid increase in firearm-related violent crime in Chittenden County.