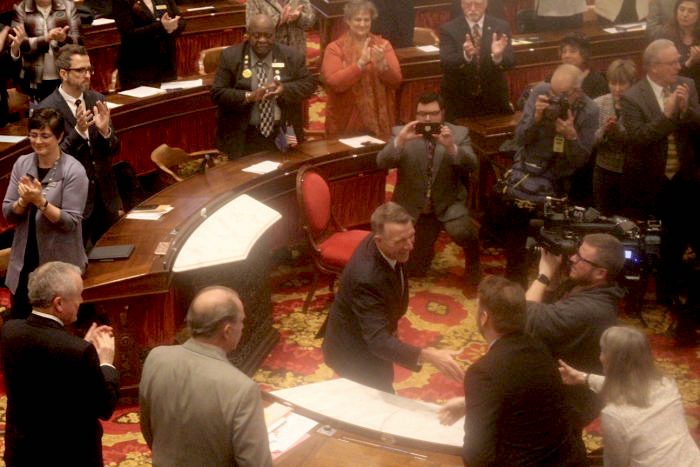 SECOND TIME AROUND: Vermont Gov. Phil Scott shakes hands in the House chamber as he prepares to give his second inaugural address.

MONTPELIER — Gov. Phil Scott on Thursday delivered his second inaugural address, calling for bipartisan cooperation and listing priorities ranging from clean water funding and a reform of Act 250 to statewide testing of lead in schools.

The atmosphere of this year’s inaugural address differed from previous speeches at the open of the prior two sessions. The new reality is that the governor no longer has dependable veto power, as liberals hold supermajorities in both the House and Senate.

At the start of his speech, Scott addressed the hostile tone of political discourse taking place across the nation and in Vermont.

“Each time [we begin a session], we’ve gone about our work against the backdrop of a national political environment that brought out the worst in the public process. Unfortunately, this still exists today, as too many value political points over policy solutions,” he said.

As in past years, he reiterated his well-known theme of making Vermont an affordable place to live. 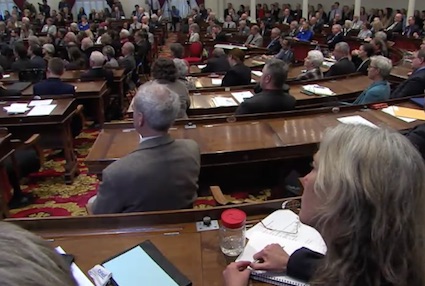 “An affordable Vermont, with opportunity and economic growth, with great schools in every corner of the state and policies that benefit all Vermonters — this can be our legacy,” Scott said.

But to make the state more affordable, the government must come to grips with continued fiscal challenges, including its massive pension debts for state workers and teachers.

“The debt we owe today is over $4 billion and the annual payments to catch up continues to grow by tens of millions each year,” he said. “But let’s be clear: A deal’s a deal. Each of these commitments are important, but our stagnant population is threatening every service we deliver, every program we administer and every investment we hope to make.”

So far, the state is estimated to pay $129.5 million for the teachers, which is $23.8 million more than last year. Also, $79 million is expected to go to the state workers program.

On the topic of education spending, in years past Scott has mentioned mandating student-to-staff ratios and putting caps on school spending. On Thursday, however, he laid out a vision for equal educational opportunities from school to school.

“Let’s not resort to scare tactics,” he said. “Let’s roll up our sleeves and make change that gives all our kids an equal shot at success, that puts their interests above special interests, and builds them – hands down – the best cradle-to-career education system in the country.”

Presently, the state is in a prolonged battle with communities over Act 46 school district mergers. While he acknowledged widespread frustration with Act 46, he encouraged lawmakers to focus on what’s good for students.

“Many of us here today have heard countless debates about education, but far too often it’s been about something other than the kids themselves — from taxpayers to teachers, the fate of buildings and debt, old districts and new districts and rates and rebates,” he said.

When it comes to attracting people to come to Vermont, the governor said health care could be an advantage.

“Vermont has one of the lowest uninsured rates in the nation,” he said. “We rank among the top states for the health of our women and children, the number of mental health providers and physical activity. … I’ll propose health insurance reforms on increasing affordability for Vermonters and, specifically, young people, as we work to retain and attract more of them.”

Other issues Scott put on the table as priorities were the clean up of Lake Champlain, which will cost about $1 billion over 20 years, and paid family leave, which he wants to be “opt-in.” The priorities reflect his continued goal of pursuing government objectives without raising new taxes.

On Act 250 reform, Scott said the state can “encourage more compact development while preserving our working lands and rural character.”

On the green energy front, Scott indicated that state money would be used to subsidize electric vehicles, which have been slow to break into the market when compared against their gasoline counterparts.

“We rank high when it comes to air quality, but we can do more to lower emissions in our state. So, I’ll propose using [Volkswagen] settlement funds to help more Vermonters purchase electric vehicles,” he said.

Scott also addressed the controversial move to do an incentive program for remote workers to move to the state. While the move drew much criticism, Scott indicated such policies might continue.

“Just passing this law gained international media attention, and as a result, nearly 3,000 people inquired about the program.”